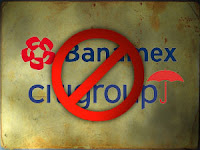 Via the Finetik blog linked here, your info-hungry Otto finds out that Banco Itau (ITU) sent an official communication to the Brazilian regulators last night stating that Itau “..is not negotiating any stake in Banamex’s capital..”.

Now that doesn’t mean there’s no interest, of course. The ITU honchos have already said they’d be interested purchasers if and when Banamex went up for sale. It does mean, however, that ITU isn’t doing anything proactive right now. This fits with the official Citigroup (C) line that Banamex is not up for sale, of course. This won’t quell the rumours, but it will put a dampener on short-term speculation for sure. However it should be clearly pointed out that none of this addresses the core issue here: As explained previously if the US gov’t takes its 36% interest in Citigroup as planned, C will be breaking the Mexican law and cannot hold onto Banamex as things stand. That’s as plain as day.

Finally, a word of kudos for the people at Finetik; I’ve only recently discovered the blog (which is part of a wider capital markets company that specializes in Latin America as well as Asia) and put it on my RSS, but I’ve been very impressed with the quality of information passed over there. I can thoroughly recommend it and say it would be a good addition to your own RSS feed (or regular bookmarked visit). Here’s the link to the blog’s main page.

Disclosure: I have no affiliation whatsoever with Finetik and have never even spoken to the people in my time. I just think it’s a good blog that covers LatAm finance well.

Related Post
Itau, Banamex and Citigroup: Rumours in the village