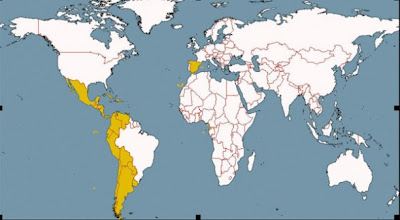 According to this report on The Cervantes Institute’s recent “Spanish Language Day”, Spanish is now the second most spoken mother tongue in the world. Here’s the league table:

The report goes on to note that away from the Spanish speaking countries of the world, there are now 24 countries where people grow up speaking Spanish as a mother tongue. This group accounts for 40.52 million people, with 36.305 million of those living in The USA. It’s also estimated that by the year 2030, 7.5% of the world’s population will be native speakers of Spanish.

So how’s that ageing population and baby boomer thing going on up there, guys?