What’s even worse: This happened Sunday and that sociopath Neumeyer decided to keep it quiet. Seriously Keith, WTF? You loll around your office, trying to make yourself out as the coolest guy in town, sipping añejo tequilas and espousing on the spiritual benefits of yoga, but when reality intrudes into your pathetic fantasy world you just fold up into a corner and pretend nothing’s happened. Coward.


Four Dead in Explosion at First Majestic Mexican Mine: Excelsior

* Explosion happened Sunday afternoon at one of the mine’s scoops

** Subsequent fire affected part of the mine


To contact the reporter on this story:
Cyntia Barrera Diaz in Mexico City at 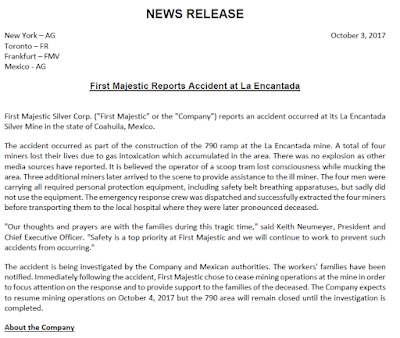