On Wednesday evening, after the bell, First Majestic Silver Corp (FR.to) announced this $25m financing (10m shares at $2.50 a pop, half warrant at $3.50 attached). Ok, yeah well, another dilutive placement. But if you look at Wednesday’s trading patterns it’s clear that Da Boyz were once again screwing people over with insider information. 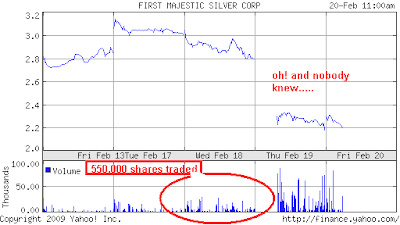 You know the last time FR.to traded 550k shares in a day? November 10th 2008. The most trade in a quarter as the stock sinks…hours before a nasty dilution that halted next morning ‘s trade and then saw it drop 22%? “Whatever makes you suspect insider dealing, Otto?” And hey wow! looky… 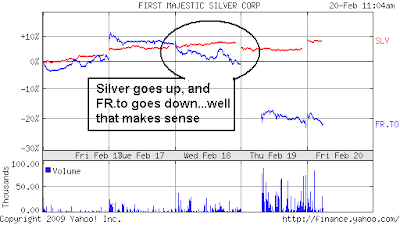 ……silver actually went up on the same day. Yup, every reason to sell a silver miner.

Yesterday I mentioned I was mad about this and would write a long post explaining things. Well I’ve calmed back down to my normal cynicism in the last 24 hours and I decided not to write all I could write about FR.to and the brokerages. I don’t thrive on bile and all this stuff about Stanford and everything has started to wear the anger-meter out too much. Suffice to say that this week is another good example of the cozy Canadian mining game, where everyone wins except well-meaning retail shareholders that try to be loyal to a stock.

The toothless and impotent OSC just turns a blind eye to this illegality. You’re on you’re own, I’m afraid, so in my personal opinion FR.to is another one for the list of easily avoidables. Don’t buy it, don’t sell it, don’t short it. Just avoid it. Vote with your feet.