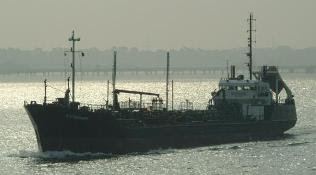 Here’s a business going on as we speak that leaves me thinking it lies somewhere between piracy, capitalism, smart opportunism and sheer barefaced cheek.

With the much publicized drop in the Baltic Dry Index (BDI), tanker space has suddenly become much cheaper. As Argentine newspaper Critica reports today, one company has come up with an idea to take advantage.

Makhena S.A., a company with offices in Miami and Buenos Aires, offers to transport crude, unprocessed river water from the Paraná River (that which flows into the Rio de la Plata) and transport it across the Atlantic to customers in Africa or the Middle East. Here’s the company web page that offers:

The water is an irreplaceable element for the support of the human life and the rest of the alive beings, being a essential into innumerable productive processes. In spite of being renewable, the shortage of the water gradually shows as they increase to the demands and the conflicts by its use.

Or in other words, they send a ship up the river, open its sluices, fill up with H2O, carry it across the Atlantic and pocket the profits. According to the Critica report, the going rate is U$2m for 70,000 metric tonnes of water. The Argentine government gets 10% as its royalty, then the shipping company gets $1m for its services. So if Makhena can walk away with $800k for a shipload of river water that’s a deal likely to be copied, methinks. By the way, my Casio also says that at these rates the water sells for just under U$0.03 per litre.

A lot of ink has already been spilled about possible water wars in the 21st century. Maybe this type of business is the first manifestation of a trend.