Fortuna Silver (FVI.to) (FSM) at Lindero: What a difference a year makes

That was then and this is now: 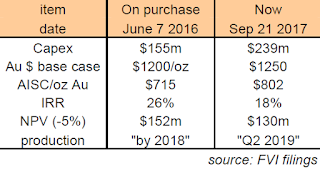 It took a year and a bit to show that the parameters under which FVI bought this dog of a project were just another bunch of BS lies. And the thing is, the complete BS that FVI bought into wasn’t a PEA or a pre-feas, it was supposed to be a feasibility study! It’s even had the Argentine Peso devalue heavily since mid-2016, lawd help this project if local costs hadn’t got that much cheaper in dollar terms.
And of course, there’s the dirty little secret about Lindero; FVI will tell you they’re commissioning in 2q18, but the cyctle times at this heapleach are so slow that you’re not going to get a year of full production until well into 2020. And they sold this to its shareholders as “first year of ops 2018…gotta laugh.
And of course, it’s in Argentina, where angels fear to tread and fools rush in. In other news, nice to see Ganoza finally buy a few shares of his own company (under duress from shareholders), which takes his skin in the game from almost fark-all to not quite fark all.