Fortuna Silver (FVI.v): and in a shock development…. 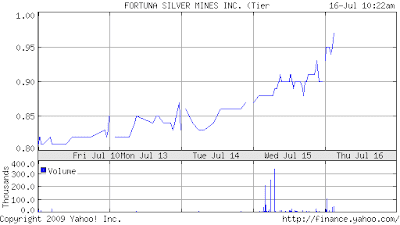 …people are now beginning to realize that FVI does have silver in its silver mine and that they haven’t been playing some silly trick on the world of high finance. Yes, Virginia, twenty point three million ounces of silver means the mine isn’t going to close any time soon. Here’s the PR:

VANCOUVER, BRITISH COLUMBIA–(Marketwire – July 16, 2009) – Fortuna Silver Mines Inc. (TSX VENTURE:FVI – News; BVLAC:FVI) is pleased to announce the release of an updated NI 43-101 compliant mineral resource and reserve estimate for the Caylloma Mine located in southern Peru. Caylloma is currently in production at a rate of 1,200 tpd and is forecast to produce 1.6 million ounces of pure silver in 2009. For the first half of 2009, Caylloma has produced 853,162 ounces of silver or 53.3% of annual forecast production. Silver production accounted for 48% of revenues in the first quarter of 2009 and Fortuna projects that silver revenues will remain at a similar percentage of total revenues for the remainder of the year.