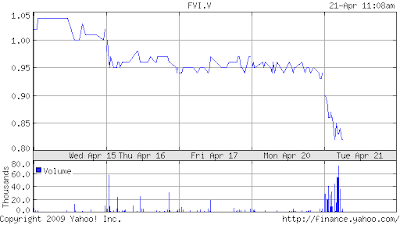 Right now Fortuna Silver (FVI.v) is down 12.77% at $0.82 on triple average volumes because a large flock of unwitting sheep have been fed bullshit by the scamster Doug Casey.

Yesterday, “the Casey team” decided to publish a “sell” alert on Fortuna. You can read the whole thing below (and f*** your copyright Dougieboy…bite me) but basically the note’s argument is that due to political and social problems at its San José project in southern Mexico they decided it’s not a good time to hold.

This is bullshit. I’ve just got off the phone with FVI and they’ve told me that yes, the road is blocked there right now but it isn’t affecting FVI’s operations in the slightest. They also made it 100% clear that they have the support of the vast majority of locals. In their words, “if we didn’t have local support they would have kicked us out ages ago. And how on earth could we have recently submitted our environmental impact study without respecting the local people and getting full cooperation from them?” Quite right. Casey speaks of “kidnappings”, which sounds dramatic in the English language but it’s not that much, really. In a protest situation the act of holding someone against their will may technically be called kidnapping, but it’s a very common occurance South of the Rio Grande. Casey talks about “beatings”; oh yeah? Show us the bruises, blowhard! Casey talks about “our sources in Mexico” which is the biggest laugh of the lot, as all they’re doing here is taking the conversation they had with FVI and spinning it their own way. They probably couldn’t find Oaxaca on a map, let alone have a special source there. It seems that the agitators are using very suspect arguments to make their protest, too. For example they are trying to scare people by talking about cyanide and its effects when FVI is not going to use cyanide at San José.

So why has Casey sent out this sell alert? That’s easy enough…he’s a self-serving manipulator. He most probably sold out above a buck and now wants in lower and I’ll bet you a tenspot that soon enough when this has all blown over (and it will), Casey will alert his sheep with a “Good news! Looks like it was a false alarm! We can take advantage of these low prices, folks!” message and up she goes again….after having bought in himself, of course.

The guy is a despicable, untrustworthy BSser. Here’s the column from yesterday that’s managed to part his flock from their bankroll once again. Fortunately he’s also a great contrary indicator and I’ll be picking up FVI once the sheep have panicked their way to the bottom. That may be today or may be tomorrow, but be crystal clear that just the Peru Caylloma operation on its own is worth at least $0.90, so right now you’re getting the San José gig for free and Caylloma at a discount. DYODD

Unfortunately, the news from Oaxaca, Mexico, where the company’s high-grade gold-silver San Jose project is located, is not so good. There has been violence, including beatings and kidnapping of local officials (but not any company personnel, yet).

Our sources in Mexico indicate that with an election coming up, state and federal officials don’t want to get involved — they don’t want photos on the front page of every newspaper showing police or army units dragging peasants away. Neither does the company, for that matter.

The good news is that the San Jose story does not have significant national presence in Mexico yet, with little mainstream press coverage. There’s coverage on several left-wing, environmentalist web sites — a clear smear campaign — but it’s not clear that there is any serious money behind them. Fortuna’s proposed processing wouldn’t even use cyanide, so the scaremongering is even more unfounded than usual.

From what we have gathered so far, San Jose does not seem to be a major focal point the international environmental movement has chosen to pick a fight over. So, the trouble could blow over.

Also on the plus side, Fortuna is done with its drilling and had no time-sensitive work going on at the time the trouble boiled over, so the road blockade has not materially affected operations.

Management argues that if the town really didn’t want the mine developed, the company would have been blocked long ago and would never have been given permission to drill, etc. We have been on site and agree; the protesters are not the Voice of the People.

Simon Ridgway and Jorge Ganoza are smart guys, with many years of experience dealing with Latin American politics; if anyone can smooth this over, it’s this management team.

However, there’s bad news too:

We hear that the mayor tried to call a town meeting, and the agitators broke it up and kidnapped the mayor for some hours.

We understand that the ejido (land commission) also tried to have a meeting, and that the agitators broke that up with violence as well, kidnapped the ejido commissioner, and beat his wife severely.

There’s a local priest lending his support to the anti-mining crowd.

Where does all this leave Fortuna?

We like the Caylloma mine a great deal, but it’s relatively small; San Jose is very important to the company’s future.

It’s possible that the trouble-makers could be persuaded (or bribed) by their neighbors to drop their opposition or leave. The fact that Fortuna has been able to work in the community for years does support the view that most of the locals are on their side. The fact that Fortuna doesn’t actually need to do any work on the ground right now (the drilling is done, and the core is all logged — the next step is in the hands of the engineering firm doing the resource estimate — argues for patience.

Sooner or later, Simon and Jorge will probably make this work.

However, the fact that there is no clear solution in sight argues for getting out. If we sell and things go south for a time, we might be able to buy back in cheaper. And if we sell and things clear up, we can always buy back in again, with our transaction costs being our main source of pain. But if we hold on and things get rough in Oaxaca, we’ll probably have to hold for a very long time to get out without taking a much larger loss.

Consequently, we are, regretfully, closing our position in Fortuna. For now. Some of us here at Casey Research may hold on to our shares, because we have a high tolerance for risk and can be patient for years, if necessary. But the logical thing to recommend is stepping aside while there is elevated political risk, with an eye towards reentering the stock when things clear up and the shares seem poised for take-off again.