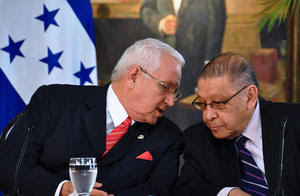 Why have a photo of one total shit when
you can have two? Micheletti and Ortez
1) THE VOTES ARE IN and the IKN readership collective whizz dumb has decided the fate of Prez Mel Zel, once and future king of Honduras. There were 250 of you kooky enough to vote and here’s how it all panned out:
Sniper bullet 60 votes (24%)
Old age 56 votes (22%)
Lucha Libre Match vs Micheletti 35 votes (14%)
Suffocated by Own Hat 31 votes (12%)
Air Crash 28 votes (11%)
Poisoned Mojito 22 votes (8%)
Stabbed by Lover 18 votes (7%)
So, according to you band of wonderful sickos Mel gets to visit The Elysian Fields via a sniper’s bullet. Bummer……..I was rooting for the poisoned mojito.

2) A good note that attempts some nuanced analysis at COHA today. You might not agree with the argument but it’s about 20X better than the usual dross written on the whole shebang in the language of Shakespeare. Here’s how it concludes

If Honduras is to grow peacefully out of the morass it now finds itself in and become a stronger nation in the process, the relevant actors must stand down from their calcified positions, letting the law do what it must and do away with the de facto Potemkin democracy. Manuel Zelaya must return to the office he was elected to serve, Micheletti’s Interim Government must be dismantled, and the Armed Forces should guarantee the safety of all, with many of its senior commanders required to retire. Immediately afterward, the Honduran courts ought to protect justice by enforcing the law and impeaching some of their colleagues for breaking it. When Manuel Zelaya is adjudged, he must be given a fair and transparent hearing for the alleged 18 crimes he committed prior to June 28.. But so too should the architects of the coup. Compromise and dialogue are necessities at this point, and they must take place so that the Republic of Honduras can come out of these trying times as a coherent and lawful state and make it to the November 29 elections in one piece.

3) So what does the US diplo corp make of racist shit Enrique Ortez, the pretend chancellor of the pretend Honduras gov’t that disses the O-Man? Here’s a translation of this report on today’s press release from US ambassador to Honduras, Hugo Llorens (the thing may well exist in English but I can’t be bothered to look for it at that State Dep’t wesbite…too big):

In a press communique, the US Ambassador in Tegucigalpa, Hugo Llorens, manifested his deep indignation in relation to the unfortunate “disrespectful and racially insensitive” commentaries of Ortez Colindres about President Obama. “These comments were profoundly indignant for the citizens of The United States and for myself personally. I am shocked by these comments which I strongly condemn.

4) Another big march in the Honduran capital today, with 30,000 anti-coup protestors led by Xiomara Castro, wife of President Zelaya. She said good things and people cheered. At one point the marchers approached a police cordon and simply brushed aside the barracades. The police behind the fencing did nothing and Xiomara then went up to them, thanked them for not reacting and even hugged a couple of the uniforms on duty. Thus Micheletti gets another lesson in hearts’n’minds. Here’s Xiomara with the front row of her very, very large entourage today. 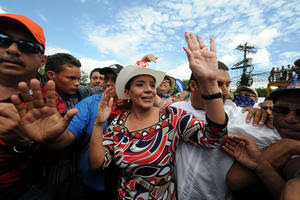