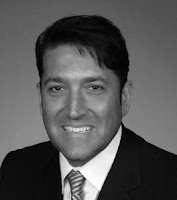 Nice teeth, nice tie, nice arty photo. Whatever happened to
grimy, dirty unkempt geologists, anyway?
As I mentioned yesterday I was mystified, even taking into account “The Venezuela Factor”, that the very positive news release from Rusoro (RML.v) wasn’t greeted with more enthusiasm by the market. So being a humble corner of cyberspace that doesn’t mope around and prefers to actually do things, yesterday afternoon I got in contact with George Salamis, President of RML.v, and asked him a few questions about the PR (as having once done a longer interview with the dude and all that). Below is the Q&A I had with him. Enjoy.
xxxxxxxxxxxxxxxxxxxxxxxxxxxxxxxxxxxxxxxxxxxxxxxxxxxxxxxxxxxxxxxxxxxxxx

IKN: What does this scoping study mean to Rusoro?

George Salamis: The Choco 10 expansion scoping study means a lot to us and clearly defines our value to be unlocked. To me, an alternate headline for this morning’s press release would read: “Attention to all mining investors and gold-lovers: Projected NPV’s for Choco 10 alone shown to be triple our current market capitalization”. This isn’t fiction, this is fact. The outcome of this scoping study shows that the combination of an expanded Choco 10 mine and a fully developed Increible 6 gold deposit creates an immense value driving opportunity for our shareholders. These two deposits, together, are company-makers by anyone’s measure. Gold deposits capable of sustaining per year, at a relatively low forecasted operating cost and non-nosebleed capital expenditure levels, are extremely rare. There aren’t many large undeveloped gold deposits left on the planet that come with sub-$300 million construction price-tags, as anyone at Barrick, Gold Fields, Anglo Gold or Goldcorp would attest to.

IKN: Personally I found it very positive news, however market reaction was rather flat on Tuesday. Any thoughts about that?

GS: Indeed, this scoping study news was extremely positive; Net Present Values in the $450 million to $740 million range depending on gold prices, projected rates of return above 50%. All very positive news and certainly the Choco 10 expansion scoping study has presented the most economically robust forecast of any mining project that I’ve ever been a part of.

Someone said the other day that Rusoro had become the Rodney Dangerfield of the mining world, “….Can’t get no respect”! I had a good chuckle from this analogy. What I can say from experience is that once the magnitude of this scoping study news is allowed to simmer in the market, this perception will change.

One unnamed journalist was brave enough to mention Km88, Las Cristinas and our Choco 10 scoping study, in the same sentence no less, in a question to me this morning, as in “Your scoping results are good, but surely what you have at Choco 10 and Increible 6 doesn’t stack up to Crystallex’s Las Cristinas gold project”. Well surely it does stack up to Las Cristinas and any other undeveloped world-class ore-body. I reminded said misguided journalist that 1) on an annualized production basis, during our projected life-of-mine schedule, we are projected to produce a lot more gold – 2 to 3 times more – compared to what’s forecasted at Cristinas or any of the other Km88 gold deposits, 2) our estimated head-grades are easily twice that of Las Cristinas and 3) at Choco 10, we’d be expanding off of a mine that already exists and is successfully producing gold now, whereas Cristinas would involve a completely new build, from scratch, at about twice the CAPEX estimated compared to our Choco 10 expansion.

Don’t get me wrong, I think Las Cristinas is a great ore-body, also world-class. Crystallex’s management have done a great job of advancing it to feasibility as did Placer Dome before them (a shameful plug for my old alma mater who also did some excellent work down there). The mining world has this warped fascination with the trials and tribulations of Km88 and I guess it’s because of the 15 plus years of controversy and excessive turf battles surrounding these projects. It’s always frustrating to witness the investor focus on Km88 and related negativity, in contrast to the great things that we have done in the El Callao district at Choco and Increible (and Isidora) during the last year on the gold production and operational end; increasing gold production, lowering costs, many positive changes meriting positive attention.

GS: This time schedule is achievable, however we’d have to hit the mark, timewise, on everything that needs to be done in terms of feasibility, permitting and financing for the Choco 10 expansion to or more of annual production. This includes resource to reserve conversion by doing detailed in-fill drilling, new resource estimates, detailed engineering studies, environmental studies, etc. We have a lot on our plates and by spelling all this out in a few sentences, I am by no means trivializing the task at hand. Fortunately, Choco 10 is an existing mine located on a permitted mine site, thus we’d expect that permitting the mine and mill expansion would not involve any significant hurdles. And then there’s financing, whereby one could potentially envisage the inclusion of some debt financing, given that our aim is to produce a bankable feasibility study in the end of the day. One should expect that it would be a lot easier to finance a new mine expansion under management with a proven production track record, a proven track record in working successfully with relevant permitting authorities and an outfit who has the Venezuelan government as a significant partner at one of their other gold mines. Anyway, one step at a time Otto, first we start with the in-fill drilling campaign and then move on from there.

IKN: What of Venezuela? All the world is hearing about nationalizations, expropriated properties and companies etc. The general view is that Venezuela is running out of finances and will take over any foreign company that dares to make a profit. Does this concern you?

GS: This is not of concern to us, but it is of obvious concern to mining investors who attribute such a considerable discount to our stock, relative to other gold producers. This is sad really, because the Venezuelan government has been extremely cooperative with us, be it in the management of our 50/50 mining joint venture with them, Venrus, or in the permitting of new projects. When we have had minor disputes in the past with the government, we have always resolved them quickly and amicably. In the entire history of our existence, we cannot point to one incident where we feel the Venezuelan government has short changed Rusoro or have tried to seize assets from us. I can’t see it happening, ever. Can I state this any more categorically? We don’t see nationalization or expropriation as a significant risk for Rusoro and its shareholders. As I’ve said before the perception of political risk, for us, resides only in the market.

IKN: We know that “the Russian connection” is strong in Rusoro, especially with the recent additions of two more Russian nationals to the management team. The perception is also that Russians have an advantage in running a business in the Venezuela of Hugo Chávez. How much do you agree or disagree with that?

GS: The Russian connection is strong in Rusoro and, indeed, having Russians working side by side with our senior Venezuelan management is a definite advantage. In addition to the recent Russian executive management appointments, we employ a lot of very skilled Russian mining engineers, metallurgists and geologists on the ground in Venezuela, in addition to a few Cuban professionals. So “yes” Otto, I strongly agree. We would not have made the tremendous strides that we have in gold mining, in Venezuela, without this.

IKN: I was sent a report with a call recommending RML today that contained the following extract.

Rusoro today released the results of a Preliminary Assessment, also known in the mining industry as a Scoping Study, completed by top-tier mining consultant Micon International. The Study uses US$700/oz gold for its base case, which we will also use in our assumptions, as Rusoro receives a 15-17% discount to the world spot price from the Venezuelan government.

So the question is, is it true RML is paid at a discount to spot for gold produced?

GS: We do indeed sell our gold at a discount to spot gold rates as other producers, past and present, have done in Venezuela for the past several years. This discount is imposed on sales by the numerous licensed gold buying entities who we do business with in-country. Our audited financial statements show these discounts as a cost of sales. This is a fact of life for all of those who produce gold in Venezuela.

IKN: When can we expect 1q09 results, George?