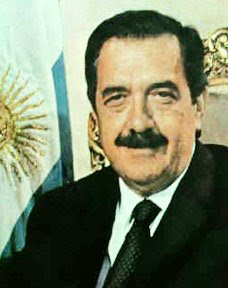 He’s 82 years old, he’s the father of six children and he’s also the greatest modern-day President of Argentina (you can tell it’s true when Peronists line up to praise a Radical) and one of the greatest Latin American presidents in my lifetime. The man is the epitome of democracy, but right now he has pneumonia. Not a good thing for a man who underwent an operation last year to remove a (benign) tumour from his lung.

UPDATE 8pm Buenos Aires time: Good news. Alfonsín’s doctor has just said he’s getting better, although still ‘delicate’. In the words of the Doc, “When a patient with cancer is complicated with pneumonia and fever, it’s complicated for a transitory period.”