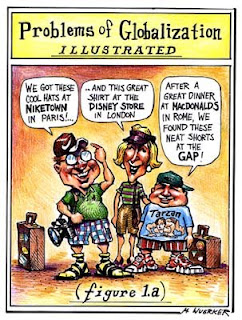 Wal Mart (you might have heard of them) is currently buying up D&S, the Chilean supermarket chain that is market leader in its home country (via its Líder brand of supermarkets and hypermarkets) . As part of the purchase process, Wal Mart today instructed D & S that it has until January 4th to remove from its shelves all products supplied by Cuba. Castrolandia supplied (up to now, at least) 42 different products to D&S, so Otto advises Lìder customers in Chile that if you want to buy your regular brand of rum, get down the stores before Sunday. Wal Mart is also banning from sale in Chile’s biggest retail chain products from Venezuela, as well as Iran and Iraq. Now whatever would all these countries have in common?

So the upshot is that there are now two LatAm countries that cannot sell their products to another LatAm country, and all three have openly socialist governments. This must be because all socialists are made equal but some are more equal than others. Trade embargoes are like the Good Lord; they move in mysterious ways. But the US doesn’t meddle in LatAm affairs any more. Oh no no no no no no………..