Over at Naked Capitalism today, Yves Smith partially reviewed ‘Once in Golconda’ by John Brooks, one of the better books on the stock market ever written (I’m glad to say I had the pleasure a few moons ago…also recommended by the same author is ‘The Go-Go Years’) that chronicles the downfall of once high-flying banker Richard Whitney.

The book excerpt chosen by Smith was a good one and reminded me of many stocks recently followed, especially this one (as it’s traded in the USA and not Canada, following the established Wall St rhythms more faithfully). 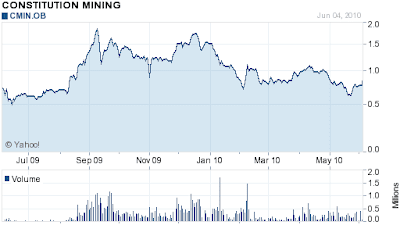 But really, that’s just one of many that could fit nicely so pick your own fave. Here’s the bit of the book excerpt that matters, a good chunk worth chewing over on a Sunday morning.

“……the pool manager, as broker, would begin buying and selling shares of the stock at frequent intervals, in no apparent pattern. Often he would buy and sell it back and forth among the members of the pool…..these essentially spurious transactions, accomplished with the sympathetic help of the specialist, would be so weighted that the price of the stock would begin to rise slightly. In speculators’ jargon, it would be “active and higher”…Thus the stock would be called to the public’s attention, and the notion of making a quick profit in it planted in the public’s mind. The eager tape-watchers would gradually begin to buy – cautiously and tentatively at first, then as the activity continued to increase and the price to rise, more and more boldly. Now the pool manager’s operations would become more delicate. On some days he would abruptly switch to the selling side, simply to create confusion; then just when the public was about to decide the picnic was over, he would come back in with a torrent of buying that would sweep all along with him. Finally, in a skillfully conducted manipulation, the thing would become self-sustaining; the public would in effect take the operation over, and in a frenzy of buying at higher and higher prices would push the stock on up and up with no help from the pool manager at all. That was the moment of the final phase….often spoken of indelicately as “pulling the plug.” With a mousiness in sharp contrast to the elaborate fanfare with which he had begun his buying, the pool manager would begin feeding stock back into the market. The price would respond by turning downward, gradually at first, then more rapidly as the pool manager’s trickle of sales mounted to a flood; and before the public could collect its senses, the retreat would have become a rout, the pool would have unloaded its entire bundle profitably, and the public would be left holding the suddenly deflated stock..”