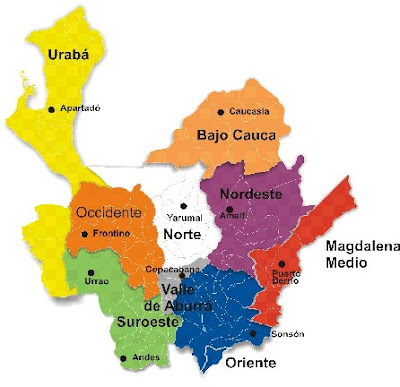 You invested in junior mining in Antioquia, Colombia? You may be surprised to find
out exactly what kind of business activity you’re sponsoring…
Colombia’s ‘El Tiempo’ magazine got access to the sworn statements that ex-leader of the Colombian far-right wing paramilitary Salvatore Mancuso (now safely under arrest in the USA) made to a judge in one of his hearings last week, and it sure makes for interesting reading. Here we go with a translation of the first part of the El Tiempo report:

Before a Federal court in Washington, the extradited paramilitary chief Salvatore Mancuso has revealed how the narcotrafficking business launders its cash via the sale of hundreds of ounces of gold that go through the Colombian Republican Bank without ever being suspected.

As he explained in several different audiences that began in January 2009, the metal is bought in Panama and a group of mafia money launderer bring it into Colombia to melt it down and then hand it over, in portions, to a group of local mayors and public officials.

These then take the gold to the bank, report it as locally produced and earn millionaire sums in state royalties.

Mancuso said that some money launderers keep up to 70% of the royalties that the government pays and the rest is stolen by the mayors.

He has already given the names of the municipalities that are involved in this business and in which the AUC (his paramilitary group) received the juicest profits: Ayapel, Buenavista, Montelibano, Planeta Rica (Córdoba) and others, located in the rich Bajo Cauca of Antioquia state.

Just two of these towns (Buenavista and Planeta Rica) received more than COP2700 million (U$1.46m) in royalties in the period during which Mancuso admits having been involved in the deals between launderers and town mayors.

This laundering technique was not known the the US authorities. Because of this, this week the US government sent its director of the Office of Control of Foreign Activities (OFAC) Adam Szubin to Colombia to look for ways that will establish amongst the local authorities what percentage of the 1.57m ounces of gold that Colombia produces might come from this fictitious mining.