Here’s the gold comment intro from IKN377, out last Sunday July 31st. The short version: It took less than 48 hours for the prediction to become reality.

Hot summer or August Doldrums?
Down dropt the breeze, the sails
dropt down,
‘Twas sad as sad could be;
And we did speak only to break
The silence of the sea!
All in a hot and copper sky,
The bloody Sun, at noon,
Right up above the mast did stand,
No bigger than the Moon.
Day after day, day after day,
We stuck, nor breath nor motion;
As idle as a painted ship
Upon a painted ocean.
Water, water, every where,
And all the boards did shrink;
Water, water, every where,
Nor any drop to drink.
The Rime of
the Ancient Mariner
Samuel
Taylor Coleridge
It’s
sometimes called The Doldrums, after the region of equatorial Atlantic Ocean in
which ships would becalm for long periods in the times when sails were the main
power source and you didn’t even need to shoot an albatross to get caught up in
one. That was in ye olden days, here in the 21st century we have the
thrusting business world and the relatively short period of August, when markets
calm and in our specific focus sector, the world of mining, will wait until US
Labor Day before coming out with any new news.
Is that our fate next
month? So far at least (and forgiving a dollar or two on Friday) gold has kept
inside the IKN predicted Northern summer range of U$1,300 to U$1,350 per troy
ounce, but for one thing we haven’t got close to the bottom of the range
(U$1,315/oz was the worst if memory serves) and for another, the way last week
panned out there’s every reason to cast doubt on that arm-wave call. And for
yet another thing there’s the above chart of GLD and XAU that shows how the
market reacted once the FOMC announcement was out and it’s difficult to call
that anything else but bullish. You can take all the geopolitical events and
wrap them up in a tight ball but they don’t come close to the real catalysts
for gold price movements, such as a couple of carefully worded lines in a Fed
release. Money talks, bullshit walks and money spoke loudly as from last
Wednesday lunchtime. 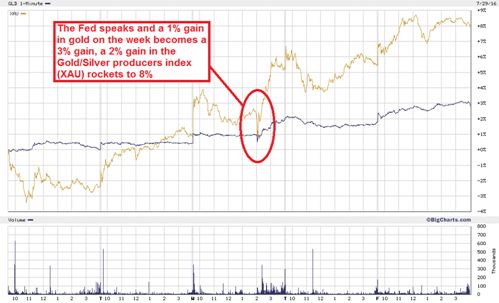 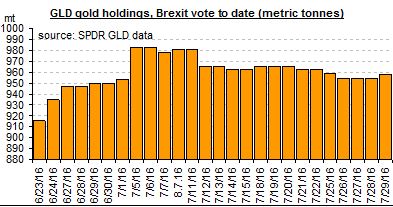 Another reason to cast doubt on the
Doldrums scenario is my interpretation (rose-tinted specs or otherwise) in
what’s happening in to GLD physical inventories today (regular chart above). In
last week’s intro piece “The metal is leading the miners”, part of the theory
proposed for expecting the miners to catch up again (which happened right in
cue I might add…toot-toot) was GLD inventories were showing that the most
speculative money from the desk jocks had been largely blown off, leaving gold
in safer and smarter hands again. That process continued last week with another
nine metric tonnes sold until Friday came along and four tonnes added, the
first real add in a couple of weeks.
That’s indicative of a new appetite
for gold from the speculative end, the type of money that pushes gold higher on
momentum. From Brexit to peak spec, we saw 66.82 metric tonnes (mt) added to
GLD. That retraced to last week’s low by 28.21mt. If that hot money is about to
slosh back in and momentum runs again, this move would see GLD holdings
challenge that big round number of 1,000mt. And talking of momo, it’s not my
idea of entertainment and never watch it personally but trusted friends who do
note that the talking heads on CNBC started giving bullish predictions on gold
again. Here’s (1) an example and here’s a typical paragraph on offer:
“Until and unless
central banks begin to tighten policy, gold continues to be an unabashedly
strong buy,” said Schlossberg on Thursday on CNBC’s “Trading
Nation.” “That’s been the theme we’ve seen building up all through
this year, and yesterday was simply a confirmation of that.”
Whoever Boris Schlossberg might be
(but great last name, “mountain castle” or “mountain palace”). We need of
course to be clear that when CNBC latches onto a bullish idea it’s already
mature, but these people are and are watched by the momo crew par excellence.
Summing up the gold chat intro, the
metal did indeed lead the miners, the miners did a good job of catching up but
there’s evidence and enough momentum talk post FOMC to say that gold is going
to blow away my early July prediction of a slow summer. So to answer my own
question in the title, put me down for a hot summer and let’s see gold break
away from U$1,350/oz next week. Reasons to be cheerful.