It’s not going to be a good day for this stock, but then again by the looks of the share price massacre here, the market seems to have decided the writing was on the wall anyway. 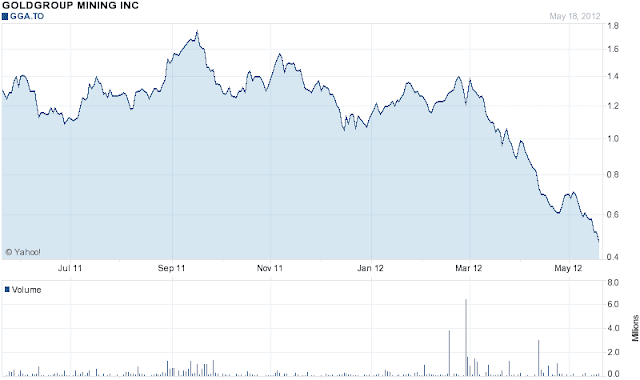 So this morning the interwebnetpipes are offering of Spanish language reports on how Mexico’s Semarnat has denied Goldgroup Mining (GGA.to) its change of land use permit, with headlines on how this decision is a triumph for the people of Veracruz, amongst other commentaries. We’re sure that GGA.to will want to inform the English speaking world of this decision later today.

PS: Subscribers, check IKN131 dated November 6th 2011 for the first mentions of the permitting problems GGA.to was facing. Then IKN148 and particularly IKN150 dated March 18th. For others, here’s a chunk of the IKN150 script as a taster:

In the latest piece on GGA.to, from IKN148 dated March 4th, this was part of the rounding-off paragraph:

“…if you want a rough idea of how your author sees that, the best guess from here is that GGA.to has perhaps a 70% chance of the EIA going its way and a 30% chance of it being rejected (in other words, I’m shamefully covering my a_s but leaning towards a pro-company result). However, in an election year such as 2012 in Mexico, this project may quickly become a political issue and as there are more permits needed between now and any production day one that are required from local rather than national sources, your author sees too many uncertainties along the road to be able to recommend GGA.to as a potential investment.”

Well folks, I still don’t know which way Semarnat is going to jump, but after the developments of late last week, even though it must be stressed that the closure was done by a local authority and the Semarnat decision is one made at a national, Federal level, it’s hardly the type of good augury those long GGA.to would want to see at this late stage. Perhaps it’s still 70/30 on this call, but now it’s the other way round with a negative from the enviro guys now the more likely (but I underscore, it’s very tough to call this one).

However, what I am 100% sure about is that the call to avoid GGA.to as an investment has been the right one…”