This morning Goldmoney Inc (XAU.to), the (and I quote) “financial technology company operating a global, 100%-reserved gold-based financial network” released its 2q16 financial results. As it’s now been four quarters since Goldmoney in its present form was created (the merger of Goldmoney and Bitgold) I thought I’d have a look at the numbers underneath this  story, what with the claim it makes of having “More than 1 million user signups with $1.8 billion in customer assets as at June 30, 2016”.
One million user signups? Hell’s teeth, that’s a lot of new people on board, they must have brought in a lot of precious metals assets to this banking vehicle, right?
Wrong.
Here’s how the customer assets of gold have evolved in the four quarters: 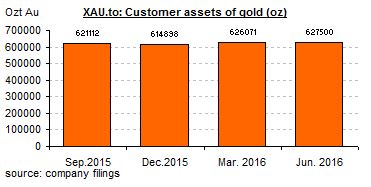 XAU.to has added just 6,388 oz of gold in those four quarters. By the way, nearly all this gold came from the long established UK-based Goldmoney when it was folded into the Bitgold public traded vehicle.
Here’s how the customer assets of silver have evolved in the four quarters: 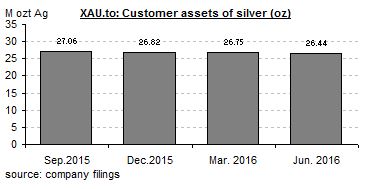 XAU.to has lost 617,254oz of silver in the period. And at current silver/gold ratios, that’s over 9,000 oz gold equivalent and means the net improvement in customer assets is in fact negative.
Here’s how the customer assets of platinum have evolved in the four quarters: 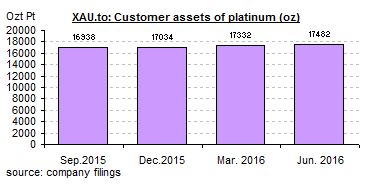 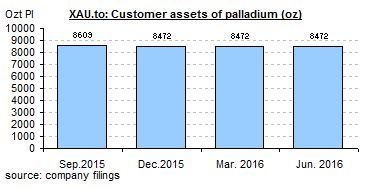 XAU.to has lost 137 oz of palladium in the four quarters (this is also small stuff next to the Au and Ag numbers).
I think it’s safe to say that XAU.to is having a little trouble converting those one million new sign-ups into active customers. So pray tell, why is this company running a market cap of $300m?