Below is the translation of this report in Colombia’s El Espectador, dated April 2nd 2012. And by the way, those of you versed in the language of Cervantes should click through, read the original version and also take in the highly entertaining comments section below the note. Anyway, here goes with the translation:

The legal battle of one of the Pacific Rubiales shareholders

An Avalanche of Lawsuits and Crude Oil 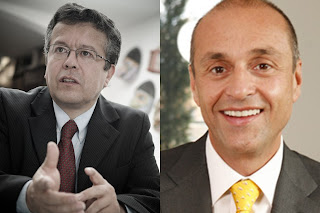 The reporter Héctor Mario Rodríguez and the
Venezuelan investor Serafino Iacono. / Gabriel
Aponte and Dinero Magazine
The snowball started with a simple revealing of stock market information. In 2009 Héctor Mario Rodríguez, editor of the news site Primera Página, heard of a high level business scandal inside Coalcorp, one of the main mining companies on the Toronto Stock Exchange. It concerned a law suit for $161m filed against five of its high level executives for a series of irregular transactions between 2005 and 2008. The names of three of the accused immediately caught the eye of the journalist: Serafino Iacono, José Francisco Arata and Miguel de la Campa, all of them Venezuelan and shareholders of Pacific Rubiales (PRE.to), the Canadian financed oil and gas company that was at the time changing the face of the Colombian private sector oil business.
“They were fired in 2008 and the company (Coalcorp) hired a forensic investigation to the company called Kroll. The only thing I did in September 2009 was to report this, that the gentlemen concerned had made a series of maneuvers”, he said.
The experts found that large sums of money had been diverted to a specific foundation and that they had covered up the movements of one of their executives. But for Hernández, the next day the judicial problems against him began. “They sued me for this case, which ended up being found as true. But I also reported that they had bought land on the island of Barú from “Turco” Ilsaca, that they had bought a yacht and that they had made improper use of the company corporate jet…”
The suit for libel and defamation was brought before the General Fiscal of the Nation by Iacono, and after a tense and prolonged judicial process the judgment went in favour of the journalist in 2010.
The message of the suit
Among the anecdotes that make up this case, Hernández highlights the events of April 9th 2010, when the Fiscal called him to declare under oath on the Day of the Journalist. This is a case of messages. They wanted to tell me that I don’t touch them any more”, he said. But this wasn’t the only suit to which he had to answer. As the legal process advanced, he decided to continue investigating the information about companies in which Iacono had interests and those that, due to them being publicly listed companies, must report to the Stock Market. There he found “bizarre salaries” that he (Iacono) and his colleagues were awarded, contractual problems between Pacific Rubiales and Ecopetrol and, above all, the confusions in the numbers at the oil and gas company Alange, which had changed its name to PetroMagdalena. “At the end of 2010 40 executive were fired for having inflated the numbers. When the issue was made public in January of 2011 the share price dropped by 70%”, he recalled. The response wasn’t long in coming because this time, as well as being sued again for libel and defamation, they accused him of having caused economic panic.
The judicial avalanche
“This charge is made when a person, with a news item, wants to generate expectation or put in risk the judicial or economic security of a company. Not that of the economy in general”, explains Jaime Lombana, the lawyer that represents Serafino Iacono in this case, from New York. Not only the company price, but also that of Pacific Rubiales as, according to the litigant, the snowball converted into a large avalanche. “As a consequence of the acts of Héctor Mario Rodríguez, at that moment the shares of Pacific Rubiales (PRE.to) fell slightly due to the noise generated.”
Between notifications and declaration, the fight has left the courthouse
Various organizations that defend the right to information, such as the Foundation for the Freedom of Press (Fundación para la Libertad de Prensa (FLIP)) of the Circle of Reporters of Bogotá (CPB) started to take interest, while in recent weeks some media channels, amongst those El Espectador, have re-run an editorial from the website Primera Página denouncing that they want to gag the press using judicial bullying (ie the constant notification of process steps). And from this, a new dispute has arisen between the parties, as the editorial stated that “..the editor and also the director of Primera Página were part of El Espectador in the difficult era of the 1980s and 1990s and felt first-hand the daily pressure that was put upon the Cano family, then owners of the newspaper, and then all of the editorial and reporting team. So it’s fair to say that the lessons of undue pressure on reporters have already been taken and passed (by us).”
According to Lombana, the greatest problem has to do with the indirect association that the report makes between the shareholders of Pacific Rubiales and the narcotrafficking mafia. “A normal reader, reading through the report, could not tell the difference (between the two parties).”
But for Rodríguez, the centre of the problem is that the oil and gas company cannot afford to lose its contract renovation in 2016, for the Rubiales oil field contract, the goldmine of its Colombia business. “Pacific is worth today one price with the contract prolonged, and another if it is not prolonged.”