Freddy D and his pals at Great Washbasin Gold (GBG) GBG.to) (named thus due to the amount of dilution) crack me up no end and have me rolling around the floor in guffaws and snorts, so let’s take a trip back in time and see why that’s so, shall we? Here’s a slide from the GBG September 2008 (seriously, three and a half years ago) presentation that was wonderfully entitled “Responsible Growth“: 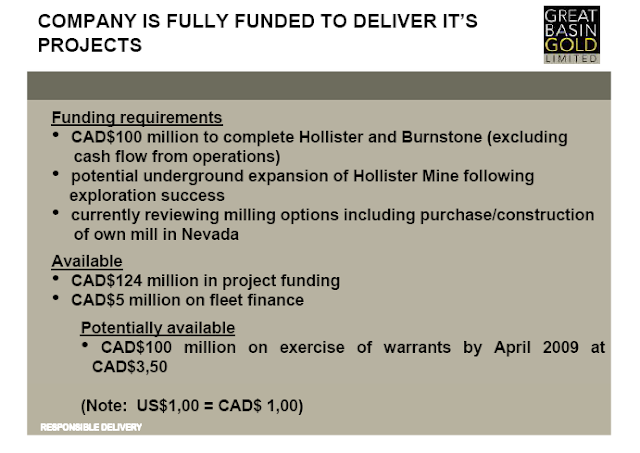 I adore that bit about how they only need $100m to bring their two mines on line and how they got that moolah covered already, don’t you? Now, here’s a chart that shows the evolution of the GBG share count from then until now:

So since the time of that “we got it covered” presentation and the projection for once the latest round of financing is closed (see below), the share count has moved from 215m shares out to an estimated 545.8m S/O, a difference of…errrr….a very lot of shares, dude.
And here’s a chart showing how the stock price has been getting on in all these years:

And here’s yesterday’s announcement (re-transmitted this morning) about an $50m bought deal for GBG that will add another 67.6m 70.15m (oops) shares to the mix if the overallotment is taken up (and that’s very likely, as we’re talking about the same sheep-shearing techniques they’ve run successfully before). Here’s how today’s NR starts:

March 8, 2012, Vancouver, BC – Great Basin Gold Ltd. (“Great Basin Gold” or the “Company”), (TSX: GBG; NYSE Amex: GBG; JSE: GBG) is pleased to announce that it has entered into an agreement with a syndicate of underwriters led by RBC Capital Markets pursuant to which the underwriters have agreed to, on a bought deal basis, buy 61,000,000 common shares of the Company at a price of C$0.82 per common share for aggregate gross proceeds of approximately C$50 million (the “Offering”), by way of a short form prospectus. The Company has granted the underwriters an over-allotment option to purchase up to an additional 15% of the Offering, for a period of 30 days following the closing.
Net proceeds from the Offering will be used towards working capital for the development and ramp up of the Burnstone Mine.

But the great news is that Freddy Oh-No-I-Never-Mislead-Anyone Dippenaar says his mine will be up and running and free cash flow positive by the end of this year. AND THIS TIME HE MEANS IT.
dyodd, dude.