Apparently the mining newsletter tout named Greg McCoach has been putting out an internet advertising campaign that starts with the headline “Massive Gold Formation” and continues with “A Little Known Gold Mining Company Has Discovered Something Big”. It then hopes you’ll click through and download a PDF file, which then goes on for pages giving mouthwatering, greed-gland inspiring prose and vague teaser-type details without ever telling you the name of the touted company, and then prompts you to sign up for McCoach’s $2,000 per annum subscription service.

Well there’s no need to click on his ad and no need to pay up $2k for the sub, either. For what it’s worth, the company he’s pumping is Explor Resources (EXS.v), the same company he ramped last year with the same style of aggressive, hype-laden pump job on the company’s Porcupine West property that turned out to be a market disappointment. This links through to the March 4th press release on the drillcore results that didn’t match the waaaaaaaay overhyped expectations drummed up by McCoach and his merry band beforehand. You can tell just by looking at the price chart: 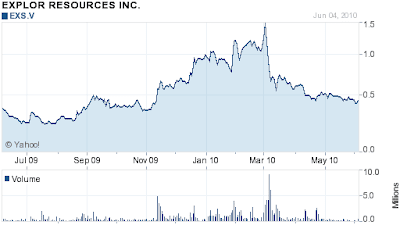 But fear ye not!!!! There are differences to the McCoach pump job on EXS.v this time:

Just though I’d tell you. DYODD, dude. There ain’t no shortcuts in this game.