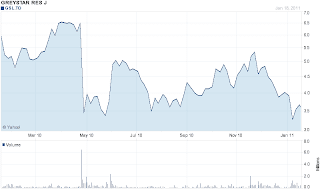 On Monday 17th, Channel One’s top news program, called CM&, ran this report on Greystar Resources (GSL.to) and its Angostura gold project in the Páramo district of the Santander region.
If you speak Spanish I urge you to watch it, because if you do you’ll see just why Colombia’s big brokerage, Interbolsa, wrote the following as its top story in its English language daily update the next day (PDF download):

– One of the most influential, highest rated and prime time TV news programs called CM&, yesterday night dedicated more than 5 minutes talking of the Paramo of Santurán, which is located in Angostura state of Santander, and the headline was “The country is in danger of one of the worst environmental misfortunes” due to the possible licenses to Greystar to explode and extract gold in a open pit mine. A detailed explanation of the death of several animals which are in danger of going extinct and of the contamination of potable water for the city of Bucaramanga and 20 other municipalities was provided. I can only say that the possibilities of Greystar now doing an open pit in that area is cero to none, as if they obtain the licenses all the NGOs will put the Santos administration against the wall!!!

Message to Can of Corn’s Nicholas CampbellSoup: You wrong, dude. Bad call.