GrowMax (GRO.v), Fertimar, dissenting shareholders and a nice photo of a ship

This humble corner of cyberspace notes with amusement that concerned shareholders have launched a proxy slate against the current management at GrowMax (GRO.v), the bit that fell off Americas Petrogas that owns its near-worthless* phosphates property in Bayovar, Peru. Basically, the dissenting shareholders are not happy about the deal GRO management has put together to buy Fertimar, a private Brazilian concern, as announced in its NR of three days ago.
Unsurprising, considering that the Fertimar company’s main asset and the reason they’ve talked up the benefits of the deal is this ship, the “Litho One”: 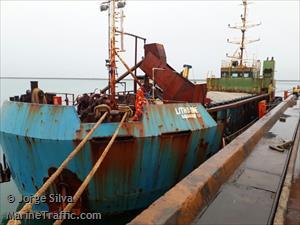 Here’s how GrowMax talks up Fertimar and Litho One in its NR spiel:

The company owns and operates a suction dredge vessel called “Litho One”
with a current capacity of approximately 500 tonnes per voyage to
recover the material from its licensed tenements. Dredged material is
off-loaded at one of three local ports in the Salvador area of Brazil
and trucked to a processing plant at the municipality of Candeias,
located approximately 40 km north of Salvador. The plant location is
adjacent to major fertilizer bulk storage and shipping facilities
operated by international fertilizer companies.