On Monday April 13th 2009, President Hugo Chávez plays host to a visit from one of his country peers. Who could it be?
The Axis of Evo Morales? Nope.

All wrong, folks. In fact, to confuse the blueeyedwhitey world that can’t seem to handle anything more complex than “you’re either for us or against us”, it’s this dude: 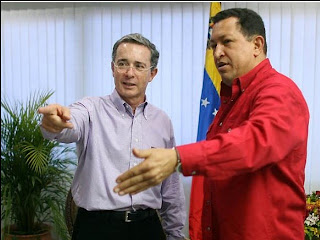 U: Where’s the bathroom again?
C: End of the corridor on the right.
America’s friend Uribe arrives for bilateral talks with Chávez that are aimed at the ‘further reconstruction of the dynamic’ (or somesuch translated phrase used by Hugo) between Venezuela and Colombia. Sounds fine by me. It also gives a chance to point out that opposites do indeed attract, because it’s an open secret that these apparent polar opposites (ok..apart from the shared obsession with re-election) are friends that like, respect and get on well with each other.