Half a kilo of C4 in Caracas, anyone? 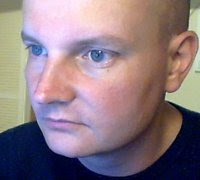 Some French dude named Laurent Bocquet (above, from his ‘feibu’ page, as we say down here) got arrested trying to escape Caracas, Venezuela, and get to Isla Margarita on Friday. He was nabbed along with Omar Campusano, Diomedis Campusano and Edgar Florián Sánchez (all from The Dominican Republic). All four are supposedly members of the criminal gang known as “The Internationals” (oh how subtle). So when police checked out the arrested Frenchie’s house in Caracas they found:
Expect Venezuelan police to be called human rights offenders for daring to arrest foreign nationals like this on their soil. I mean, the impertinence…what’s half a kilo of C4 between friends anyway?

UPDATE: Venezuela’s Interior Minister has given a presser this afternoon to name the group as a “terrorist organization”. Minister Tareck Al Aissami also said that Bocquet is known as an expert in military matters and a sharpshooter/sniper who saw action in Europe (the exact country wasn’t mentioned). Here’s a quote from Al Aissami:

“We can testify that the type of armaments used by these military terrorist organizations are for actions of destabilization. With this find we have no doubt in telling the country that we have dealt a severe blow to terrorism and to those groups that try to drag Venezuela into scenes of blood and confrontation.”