Handbags at dawn! Daniel Ameduri picks a fight with Agora

We have a new case of Scumbag versus Scumbag and IKN had a good old laugh last night when A. Reader told him about Daniel Ameduri picking a fight with Agora. The scumbag scam pusher Amerduri’s fit of pique is a sight to behold and didn’t escape the attention of several readers, who sent over his mailer last night full of spleen about Pershing Gold. Here’s an extract from poor little Dannyboy’s toy-throwing:

“…the biggest scams out there have what I like to call a “show
horse” at the top. This is the guy with the perfect resume and
background, yet knows nothing about share structure.

The scammers who control the shares give a dog sh*t company a show
horse, and then use him for promotion, when the reality is no one is
going to make any money except for the deep insiders.

Once such company I want our members to avoid is Pershing Gold.
I am shocked that credible newsletters and writers today are suggesting
this stock, and I have to truly question their knowledge of how they
vet these companies. In fact, I almost
have to question if they have some sort of behind-the-scenes deal going
on.

Pershing Gold is
openly tied to the most ruthless Vancouver stock promoter of them all,
whose name I will not mention. But for anyone who is suggesting this
stock, you should be ashamed. It’s one of the reasons on a day like
today, when the GDXJ was
up 5%, Pershing was down… You see these scumbags love to unload their
shares to the public on any strength.

There is no
new case for Pershing Gold when the king of sellers is on the board of directors.

Yes indeed, the kettle calling the pot black as Ameduri, a paid whore who gushes lyrical about worthless crap juniors to the naive masses in return for cash payments from the companies he promotes, accuses a fellow paid pumper of being a naughty boy and of low moral stature…. simply delicious, you can’t make this shit up.
But what’s behind this huffing and puffing from Ameduri? Your author’s best source explained all to his willing ears last night, here’s the back story:
1) Ameduri was paid by Joe Grosso (who happens to be another sleazeball moose pasture peddler in Vancouver, but only a bit-part player this time) to pump Golden Arrow (GRG.v) to his flock of stupids.
2) Ameduri did so, but in the video he put together (which he’s now removed from his website) he mentioned that Byron King of Agora is promoting the stock to his particular flock.
3) For the record, Byron King at Agora has a big following but he’s no mining specialist. When it comes to these juniors he gets told what to pump by his superiors who do very nicely from the deals (such is the multi-layered ways of these morally bankrupt pieces of shit who are pretending to care about you and want you to become rich).
4) Ameduri’s mouthbreather following buy into GRG all at once and the price pops (see chart below).
5) Agora HQ gets wind that Ameduri is using their name in his promotions, sees the GRG price shoot up and order Byron King to call Sell on GRG in order to 1) take a small profit but mainly 2) to screw Ameduri over. Here’s what Byron King sent to his flock, heading like this… 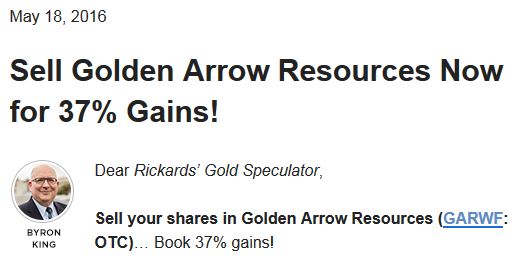 …and including such things as…

“…by
quirk of timing, we…published
our newsletter just before a bow-wave of publicity about the Golden
Arrow-Silver Standard relationship. Now there’s media out there that
paints Golden
Arrow as some sort of uncashed lottery ticket. We’ve seen some crazy
buying patterns.”

…in order words, a thinly veiled attack on the scumball Ameduri, who used that very same “uncashed lottery ticket” image to get the greed glands working in the unspeakably stupid people who read him.
6) GRG drops from its Ameduri pump high of 83c very quickly indeed, making Ameduri and his “uncashed winning lottery ticket” bullshit look very stupid indeed.

7) Ameduri now looks stupid. Which isn’t surprising really because he is a really stupid individual and, but as he’s also a sociopath you can’t tell him that and Daniel Ameduri is way to full of himself to be able to handle the truth. So instead of chalking on up to experience and letting the bigger scumbag house of Agora win a round against him, he decides to get revenge on Byron King and Agora by publishing that hit job on Pershing Gold that went out last night (see above).
8) He chose Pershing because a) Byron King is stupid enough to have this worthless piece of crap as his gold pennystock top pick and b) it is indeed run by a bigtime Vancouver crook with a “show horse” up front to make it look legit. In this case Pershing’s real driver is the scum known as Barry Honig of Vancouver, who’s been harvesting his riches from the naivete of Byron King (who claims to have visited the Pershing project and is daft enough to believe they’re “serious mining people”) and his even dumber followers.
Now that Ameduri has declared open warfare against Agora, it’s going to be fun to watch as he loses his contracts with Amir at Brazil Resources (yet another BS pump vehicle) and is ostracized by the whole Vancouver BS show. That’s the thing with Ameduri, he’s so stupid he has no idea who he’s messing with…yet.