Have a Bad Night? 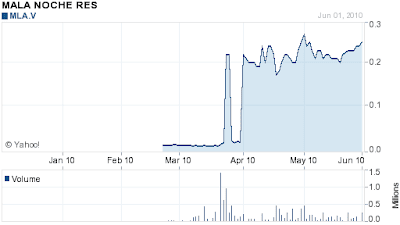 Mala Noche (Spanish for ‘bad night’) Resources (MLA.v) is doing a Blues Brothers and putting the band together. The company NR today has this 25c exploration play buying a working gold/silver mine from Goldcorp (GG) for $500m, arranging part of that cash to come from a deal with Silver Wheaton (SLW), another part from a share deal punted straight back to GG (who’ll own 30% of the gig when done) and adding the ex-chief of IAMGold as the new head honcho. Not bad for a morning’s dealmaking and it made Reuters, too.

Here’s the paste of the NR:

THIS PRESS RELEASE IS NOT FOR DISTRIBUTION IN THE UNITED STATES OR TO U.S. NEWS AGENCIES

Mala Noche Resources Corp. (“Mala Noche” or the “Company”) (TSX VENTURE:MLA) (to be re-named Primero Mining Corp.) announced today that it has entered into a binding letter agreement with subsidiaries of Goldcorp Inc. (“Goldcorp”) to acquire the San Dimas gold-silver mine (the “Acquisition”) for US$500 million. Mala Noche is also pleased to announce that Joseph F. Conway has been appointed President and Chief Executive Officer.

San Dimas consists of three underground gold-silver mines located in Mexico’s San Dimas district, on the border of Durango and Sinaloa states. San Dimas produced 113,000 ounces of gold and 5.1 million ounces of silver in 2009. As part of the Acquisition, Mala Noche will be assuming an amended silver purchase agreement with Silver Wheaton Corp. (“Silver Wheaton”) for the sale of silver based on production from San Dimas. Closing is expected to be on or about July 30, 2010, subject to customary closing conditions.

Wade Nesmith, former CEO and now Executive Chairman of Mala Noche stated, “This is a very exciting day for Mala Noche’s shareholders. We have secured a well known producing mine and have engaged a widely respected CEO to join our team. Joe was President and CEO of IAMGOLD from 2003 through to his departure in January 2010. During this period, he led IAMGOLD through its transformation from a joint venture player to a leading mid-tier gold producer with a number of development projects, a solid financial position and a strong management team. We are confident that Joe’s operations and capital markets experience will enable us to expand over the next few years and significantly increase shareholder value.”

Mr. Conway stated, “I am delighted to be joining Mala Noche as it enters this new phase in its corporate development. I see a unique opportunity to create an industry leading, low cost, low geo-political risk precious metals growth vehicle. I also look forward to working with the Mala Noche team to integrate the San Dimas acquisition, focus on increased production and productivity and leading Mala Noche to become an intermediate gold producer within the next 3 to 4 years.”

“Mala Noche has been focused on acquiring producing, or near producing, precious metals operations. The proposed San Dimas acquisition achieves this goal,” added Mr. Nesmith. “Our management team has direct experience with San Dimas as Eduardo Luna was the President of the Goldcorp subsidiary that operated the mine. Eduardo had direct responsibility for the operation from 1991 to 2007, when they achieved their best production results in their over 250 year history.”

Management believes that the Acquisition will provide the following benefits to Mala Noche:

Eduardo Luna, former President and COO and now Executive Vice-President and President (Mexico) stated, “I am extremely pleased to be returning to San Dimas to take charge of the operations and target organic growth to achieve the full potential I believe is there. I enjoyed my years there, first with Luismin and then with Goldcorp, and I think that the focus our Company can bring to the mine will benefit everyone involved.”

Mala Noche will be purchasing the San Dimas mine and related assets for US$500 million and will assume all liabilities and obligations associated with the San Dimas mine. The purchase price is made up of US$275 million in cash, US$175 million in common shares of Mala Noche and US$50 million by way of a promissory note. Mala Noche plans to undertake an equity offering to finance the Acquisition and provide working capital. The price of the purchase consideration shares will be equal to the price at which shares are offered under the equity financing.

On completion of the Acquisition, it is proposed that Mala Noche’s name will be changed to Primero Mining Corp. to better reflect the Company’s production status and corporate strategy.

The San Dimas gold-silver deposit is one of the most significant precious metal deposits in Mexico. The deposit was first mined in 1757 with historical production from the San Dimas district estimated at 11 million ounces of gold and 582 million ounces of silver, affirming it as a world class epithermal mining district.

The San Dimas mines are all underground operations using mechanized cut-and-fill mining methods. After milling, cyanidation, precipitation and smelting, dore bars are poured and then transported to refineries. Production from San Dimas in 2009 was 113,000 ounces of gold and 5.1 million ounces of silver. The long history of continuous mining at San Dimas and the known occurrence of the mineral veins and the historical record of conversion of inferred resources to reserves are all positive indicators of the long-term life of the mine.

The San Dimas district has one milling facility at Tayoltita. The Tayoltita Mill has a conventional process flowsheet that employs cyanidation and zinc precipitation for recovery of the gold and silver. The mill currently has a capacity of 2,100 tpd. In 2009, the mill averaged 1,934 tpd.

Detailed information regarding San Dimas is available in a report entitled “Technical Report on the Tayoltita, Santa Rita and San Antonio Mines, Durango, Mexico, For Goldcorp Inc. and Mala Noche Resources Corp.” which will be filed on SEDAR concurrently with this news release. The mineral reserves and mineral resources described in this news release have been verified by Mr. Velasquez Spring, P. Eng, of Watts, Griffis McQuat and are confirmed in the technical report.

Mr. Velasquez Spring, P.Eng., Senior Geologist, and Mr. Gordon Watts, P.Eng., Senior Mineral Economist, of Watts, Griffis McQuat, who are Mala Noche`s Qualified Persons as defined by National Instrument 43-101 and who are independent of Mala Noche have also reviewed and approved the technical contents of this news release.