When Minera IRL (MIRL.cse) didn’t just dump at the bell this morning… 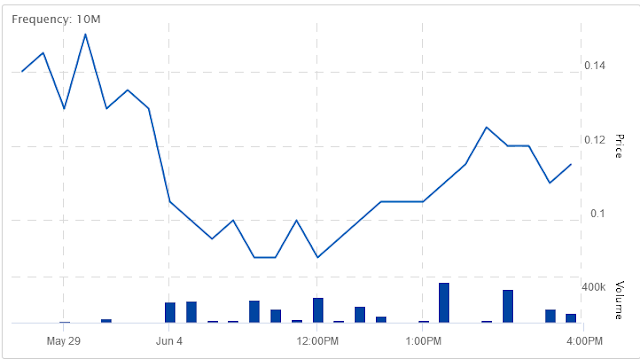 …but was whacked up to 28% by a concerted attack. Starting 08:30:00 precisely via four different brokerage desks as well as House One, the thin bid was whacked and the stock pushed the stock down 30% in minutes. Weird stuff, so the thing one does as a shareholder and a person who covers the stock is to dial them up and find out if there’s anything materially wrong. Once I’d done just that and found out the company is in normal shape with no issues, that’s exactly what I posted and by the looks of the chart, the publication of that post marked the bottom prices in a very active day, over 2m shares trade in a stock that’s usually a trickle.
However, once the post was out I followed up on the story, that aggressive stock attack pattern in a company that normally trades by appointment was unusual. Therefore, after “asking around Lima a bit” (as they say) it turns out there was good reason for the action this morning. The rumour is now rife (several sources confirmed, in fact I’d hardly call it a rumour, more like something now taken as read) IRL hasn’t just got a financing offer for Ollachea but has several offers, ranging from straight cash purchase to JV proposals or funding from strategic third parties. What’s more, MIRL is now in the final stages of working on the trade-offs of the different scenarios as part of the negotiated settlement with Cofide, with that also in late stages after its Covid-19 enforced pause. This is obviously a significant and material event and the news has now leaked out, so what we saw this morning were Lima sharks who know what kind of value is about to be unlocked at Ollachea, shaking the tree and trying to get you gringos to sell so they can jump in cheaply for the victory lap. As the pending news is obviously material, as it is now known selectively it would come as no surprise to see the stock halted tomorrow morning, or a news release before trading.