I really enjoyed yesterday’s news release from First Mining Finance (FF.v) about Springpole. Remember when FF.v was going to be a “Mineral Bank”, buy up cheap land, hold it for minimal cost, flip it out? Well these days they’re spending on twinning holes and next they’re going to spend on a “revised PEA” (a.k.a. keep asking until you get the answer you want to hear). But the best bit isn’t what they told us, but what they “forgot” to mention about Springpole, that bit about how it’s under a very large and deep freshwater lake stocked with protected sturgeon and other assorted fishies you don’t get in your average Canadian lake. Here’s the view from the mine campsite*: 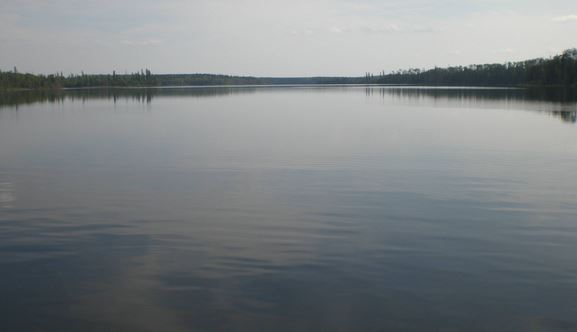 That’s Donnelly near the window, Keith in the foreground.

*Seriously, I’m not joking, that isn’t just a stock photo of any old lake, that really is the view from the camp at Springpole as supplied by A. Reader who’s been on a site visit there.