Truly embarrassing. How anyone lets Frank Holmes near their money is a mystery of the financial universe. 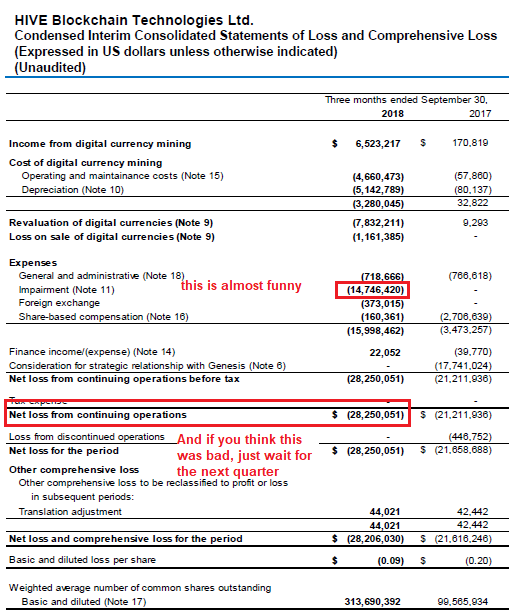 When you start delving into that net loss figure of $28.25m, some of the
details are truly amazing. For me the best one is how they take a $14m
impairment, but even then they assume a base price of $613 for
Ethereum…imagine what the impairment would have been if they’d used
true market prices! What this means is that there will be no respite in Q4, not for operations and not for Below-The-Line adjustments.

The actual revenues number ($6.523m) needs careful examination as well, because most of that is coins they haven’t sold. HIVE tries hard to bury the real info on that, but once you take tweezers to the numbers you see that in the three month period, HIVE sold $2.442m worth of digital currencies. Those coins sold cost the company $3.604m to produce and that at market prices that were WAY higher than today’s. There are other pearls of wonder buried in the operating figures, too. This company is an absolute joke.
Meanwhile, over at the balance sheet… 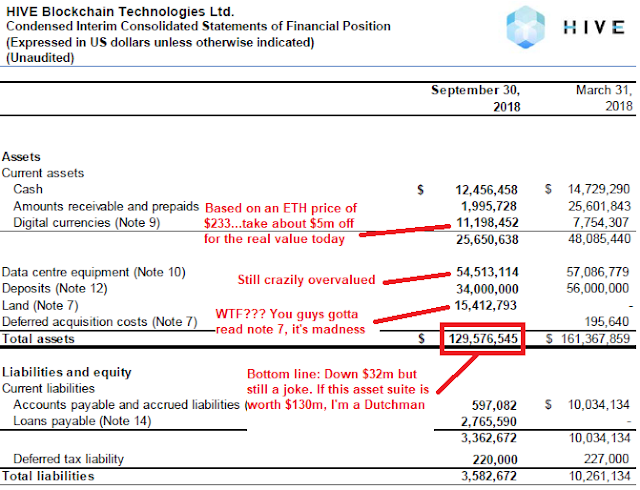 We have impressive violin accountancy on show here, let’s point at just a couple of items. The Mark-To-Market on held coins is going to whack them hard in the next quarter (again) and now that the receiveables and pre-paids are down to nearly zero, the next quarter’s cash position will drop in scary fashion. The upcoming cash crunch at HIVE can only be avoided by a very large share placement (or a loan that would come at prohibitive cost) and with 313.7m shares out already, the dilution will be of Metanor levels.
But a special mention goes to the “Land” line item and note 7, written up at $15.413m it’s the funniest thing I’ve seen in a balance sheet for months. For those just joining us, that asset is a 64 hectare tract of land in sub-arctic Norway that HIVE acquired as the place where they plan to build their next phase of beep beep machines to mine the coins. Yup, it’s just land. It cost the company U$7.225m in cash and an assumed liability of U$2.719m from the vendor, plus 4.75m shares of HIVE and 1.25m warrants that are so far out the money you need binoculars. In other words, a piece of Elk pasture procured in May (when people still thought Ethereum was a thing) for just under $10m plus shares now worth $1.5m is booked at over $15m at end September!
My stars Frank…you are one helluva shyster.