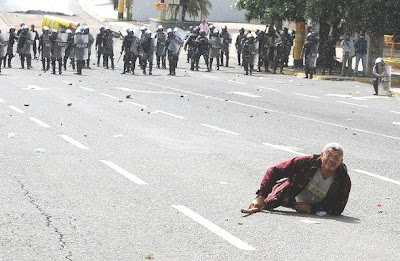 This is Honduras (photo taken today)
The new blog out of Honduras is called “Honduras Frente Al Golpe De Estado” (Honduras Confronts the Coup D’Etat…more or less). Make it part of your RSS feed as there are already 13 posts and a lot of information and photos available at the site For example this post entitled “Individual Guarantees (rights) Suspended”.

The following is spine-chilling for anyone who knows their LatAm history. I wrote when all this started on Sunday “welcome to the 1980’s”…well forget that, we’re now in the 1970’s of dictatorship, Dirty War Argentina. Remember that this usurper Micheletti has illegally seized power by claiming some sort of technical infringement of the constitution on the part of Zelaya. But as soon as he has control he simply suspends six fundamental articles of the very same constitution that pertain to public freedom. This is nothing short of outrageous. This is the direct road to secret police, disappeared people and every other Latin American nightmare of the last century. Do you support what you’re about to read “in the name of freedom and democracy?” Shame on anyone with a word to defend this scum. Shame on you.

The following constitutional rights have been suspended by the Honduran congress under the de facto command of Roberto Micheletti between the hours of 9pm and 5am Also, congress has given the right to hold a person without arrest or allowing contact with the outside world for 24 hours (renewable, of course, which means they can be held indefinitely without trial or disclosure). My translation.

SUSPENDED, Article 71: No person can be detained for more than 24 hours without being presented to the orders of the competent authority for judgment. Judicial inquiry detention cannot exceed six days from the moment of detention.

SUSPENDED, Article 78: Freedom of association and reunion is guaranteed as long as it does not contravene public order and good custom.

SUSPENDED, Article 81: All persons have the right of free passage, to leave enter and stay in national territory. No person can be forced to move from their domicile or residence, except in special circumstances and when the requisits of law allow.

SUSPENDED, Article 84: No person can be arrest or detained without the virtue of a written mandate of the competent authority, expidited with legal formalities and for a motive previously established by law. However, in-fragranti criminals may be apprehended by any person in order to deliver them to authorities. The arrested or detained must be informed in the act and with total clarity of their rights and the reasons for the arrest; also, the authority must communicate theri detention to a family member of choice.

SUSPENDED, Article 88: No class of violence or coercion may be exercised on persons to force or make them declare. In a penal, disciplinary or police issue, nobody can be made to declare against themself, against a spouse or living companion, or against family members inside fourth grade of bloodline or second of affinity. Only in front of a competent judge make statements be taken. Any decalration obtained by infringement of these dispositions is null and void.

SUSPENDED, Article 99: The domicile cannot be violated. No entry or register can take place without the consent of the person who resides in the domicile or without a resolution from acompentent authority. However, the domicile may be searched in the case of emergency to impede the commission or the impunity of a crime or to avoid serious harm to person or property.

Thank you Gran Combo Club for reminding me: The magnificent mural “Gloriosa Victoria” by Diego Rivera, 1954. A celebration of the Guatemala coup backed by the United Fruit Company