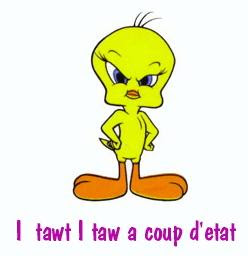 Thanks Bina; you knew I’d steal it one day
An update on yesterday’s post. The Honduras delgation to the United Nations has just declared there is “A coup d’etat in progress” in the country. The delegation says that “there is an attempt by some sector of Honduras society to overthrow President José Manuel Zelaya.”

Meanwhile, the man in the centre of the supposed revolt, the head of the joint armed forces General Romeo Vásquez, told reporters today that the political situation in the country “is still difficult, but can be resolved through dialogue”. He also explained the continuing presene of troops on the streets of the capital Tegucigalpa were due to said “difficulties”. This, for me, is the kind of talk used by military chiefs that suddenly smell the political balance of power tipping their way.

It also fits in with Honduran opposition congressional moves to try and force the president to resign, all with the backdrop of Sunday’s constitutional referendum that (if it goes ahead) will decide whether presidents will be allowed a re-election. Congress was apparently about to vote in favour of the destitution of its president but then both opposition and government members of parliament “received calls” and the final vote did not take place.

All in all, it seems that the death of Michael Jackson may be useful to the USA after all, carpe diem and all that. Also it seems like a step back in time to when Thriller was number one and military coups were all the rage this side of the Rio Grande. I mean, what would the US gain from having a Central American nation controlled by a military junta surrounded by countries with leftist governments, anyway…..?

UPDATE: Here’s a comment from someone on the ground in Honduras that was just left in the comments section…worth adding here, I reckon. Thanks for the words, Wendy.

Hi,
I am a Canadian expat living in Honduras…. I just wanted to clarify what Sunday’s referendum…as you say “if it takes place” is really about… I notice you have stated it’s “to decide whether Honduran President’s will be allowed a re-election”… This isn’t exactly the case..it’s actually to decide whether the country will give the President the right to be able to change the constitution in any way he sees fit. ie to give him a “carte blache” to rewrite the Honduran constitution….many believe this means he will seek to remain in power perpetually, as his cohorts Chavez and Castro have done. This is what all the protests are about. None of the people want this. The Supreme Court has ruled the referendum illegal, has told the military not to comply with President Zelaya’s attempt at a referendum on Sunday.
We’ll see what happens…. He was able to push thru the ALBA agreement against the wishes of the people of Honduras…… Unfortunately many people here, will vote for whoever pays them the most…. I believe the going rate for Sunday’s referendum is the equivalent of $26US.