Honduras: The World Bank “pauses”, the coup is finished 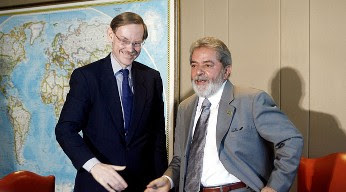 I am the operator of my pocket calculator
Holy Moley, I never thought I’d see the day. Robert ‘Kraftwerk’ Zoellick (here pictured with Lula), is “working closely” with the OAS and as a result has “paused” lending to Honduras. This might sound rather meek to you, but to your humble LatAm moneyhead correspondent it’s a damnation far stronger than anything Hugo could ever cook up.
This coup is official, total, utter toast and I wouldn’t want to be in the usurper Micheletti’s shoes next week. Here’s Reuters;

WASHINGTON, June 30 (Reuters) – The World Bank has “paused” all program lending to Honduras following a military coup in the impoverished country, World Bank President Robert Zoellick said on Tuesday. “We’re working closely with the OAS (Organization of American States) and looking to the OAS to deal with its handling of the crisis under its democratic charter,” Zoellick told reporters, “In the process we have put a pause with our lending.” (Reporting by Lesley Wroughton; Editing by James Dalgleish)

UPDATE: Holy Moley The Sequel! Even the righties at The Miami Herald agree!