How Agora copywriters trick you into buying their worthless products

On Saturday morning, A. Reader forwarded me the latest piece of guff and nonsense out of Porter Scamsberry’s Agora house of trickery. The mailer was called “Watch This”, it was distributed out of Casey Research and here’s a screenshot of the top of the mailer: 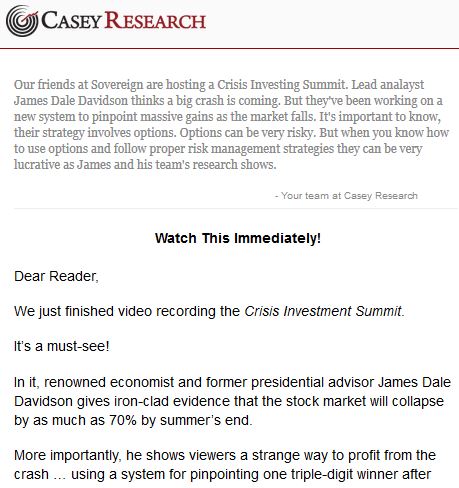 It then goes on, the usual greed-gland marketing hard sell style, with the finishing flourish at the end just before your video of two serious white males talking to each other about very important things “…the copywriters who work for these shops have the game down to an art. Consider this one…
“…James Dale Davidson gives iron-clad evidence that the stock market will collapse by as much as 70% by summer’s end”
What’s
iron-clad? The brain is led to believing the iron-clad thing is the
upcoming crash. That’s not what the sentence says. The iron-clad thing
is the evidence that James Dale Davidson will offer you. You then need
to consider the word “evidence”, because it’s one of the favourites of
these copywriters. What does “evidence” really mean compared to its
image? Evidence is connected in the brain to truth and proof, but in
this case it’s merely going to be a subjective opinion. That’s also
evidence and the word is being used correctly, but copywriters love it
so much because it conveys a different image
And then this one is another beauty:
“…. I am willing to guarantee that I can show our viewers how to make 1,000% in gains over the next year.“
Thousands
of people will read that and think “He’s guaranteeing me a 1000% win!”.
But look again, what exactly is he guaranteeing? Yup, he’s guaranteeing
that he can show you something. No more, no less.