Don’t let the facts get in the way of a good story, they say.

In this case it’s Bloomberg and Argentina, but as you may be aware there are plenty of other media channels running the same game. Usually and oh so coincidentally the bias tends to be against those countries with governments deemed to be Socialist by our judges up North so Venezuela, Argentina, Ecuador get it in the neck. Bolivia used to be a target, but since people finally worked out that Evo’s government has been doing a great job for years on end (IKN was explaining that to you in 2009, before the hipsters parachuted in) the North has quietly dropped the subject.
Anyway, the example today is Bloomberg and its long-running campaign against Argentina and the government of Cristina Fernández de Kirchner. The author of the biased tripe du jour is one Camila Russo and the headline screams at us “Argentina’s Poverty Risks Quadrupling, World Bank Says”

Oh mah gerd, you say, on reading the dramatic header. Then you continue with…

“Argentina risks quadrupling its poverty level as the economy stalls, the World Bank says.
Those living on $4-$10 per day, or 33 percent of Argentina’s population as of 2012, are vulnerable to falling into poverty in the case of an adverse shock, according to the World Bank’s 2015-2018 report on the South American nation. The poverty rate for the country’s 43 million people may increase to more than 40 percent from about 11 percent, it said.”

…and it goes on, then the text (for its own sweet reasons) jumps to talking about the recent default. Which is nice. Go read it yourself, it’s all good fun and once you strip away the rhetoric and look at the cited World Bank publications, it is indeed all there in the databanks and stats sheets. But amazingly, context is missing. And that’s because once you take the free floating stats and look at them in real world context, things aren’t anywhere near as dramatic and negative as a so-called “news” organization would like you to believe. There are two things you need to know to get it focussed nicely:

1) What “vulnerable” really means in the context of the World Bank data
2) Where Argentina stands compared to peer countries.

First that word “vulnerable” and as it happens, IKN did a little explainer on that just a couple of weeks ago in this post. Here’s the relevant extract:

1) Poor. Says what it means, standard definitions apply.
2) Vulnerable. This is the sector of the population that has either a) risen out of poverty but is at risk of falling back in if things don’t go well or b) dropped away from the secure middle class category and runs the risk of becoming poor. For what it’s worth, in LatAm this is usually the a) group.

3) Middle class. Says what it means, standard definitions apply. People just like your author who are fortunate enough to have disposible income and the trappings thereof.

OK, so now we know what “vulnerable” is, it’s those people who aren’t poor but aren’t the established middle class.
Now the context, which is available for all to see in the CEPAL/ECLAC data (that’s the Chilean-based LatAm stats house used by the United Nations and the World Bank for their data source, it’s been that way for many a year). As luck would have it, Greg Weeks over at his blog posted on this very subject in late August, here’s the link and all you need to do is go look at the CEPAL charts he reproduces to see that the situation in Argentina isn’t bad, in fact it’s pretty good. It even prompts Weeks to say, “As is so often the case, the trends defy easy ideological identification. Argentina, for example, is doing quite well.” Here’s the key chart from his post: 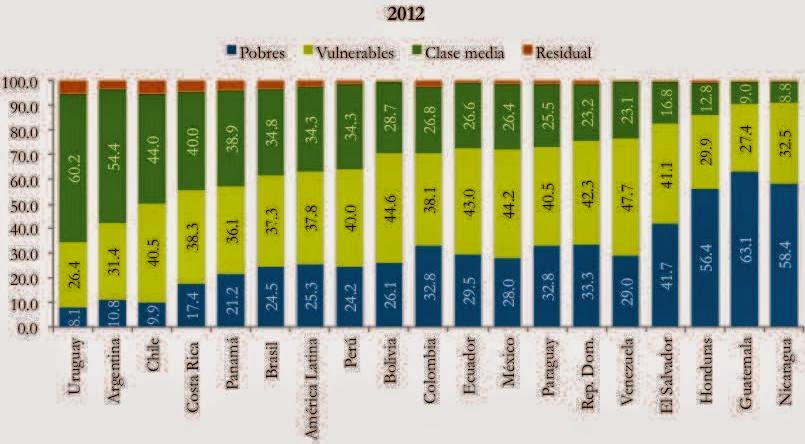 So, Argentina has 10.8% in the poor bracket, then 31.4% in the vulnerable column and that’s how Bloomberg gets the “quadrupling” word into its headline. But what they don’t tell you is…
And we could continue, stacking Argentina up against similar sized countries, or the Latin America average, or whatever else. In short, Camila Russo and Bloomberg are in such a rush to stick the boot into their preferred bugbear that they either didn’t notice or couldn’t be bothered to tell you that Argentina’s doing rather well, and that’s via the very same dataset they used to write their biased and moronic hit-piece. And let’s be clear on this; if you’re now expecting Bloomie to run a similar note on one of the deemed “friendly” countries such as Peru, Colombia or Chile (because hey, they could use “Quintupling” in a headline about that last one, even add a few exclamations for taste) you’re in for a very, but very long wait.
And that’s how your “news” is framed by LatAm-hating news agencies, oh Northern dwelling English-speaking people.

UPDATE: Site friend Abel has done a wonderful job of translating the above post into Spanish as part of this post on his blog, as well as adding more context and comment about the way in which the Bloomberg note was picked up by opposition media inside Argentina.