Before this starts, let’s make it clear that I don’t really have an issue with Southern Silver (SSV.v) the company, it’s hardly the worst thing out there and what you see below isn’t some sort of exceptional situation. It’s the way that the Venture exchange system works, that’s all. If you read the words below you may get an idea of how stacked against the retail player the whole thing is.
As we know from recent NRs, the previously very-strapped-for-cash Southern Silver (SSV.v), a company in the “Manex” group of companies under the auspices of Lawrence Page (or as he always prefers, Lawrence Page QC) ran an equity financing between late January and March. The deal was 20m units at 8c a pop, with one unit giving the buyer a share and a whole warrant priced at 8c The  main taker was the Electrum Group, the big NY based investment house run by Thomas Kaplan and into several junior companies (first and foremost NovaGold (NG)). But we can also find out at least some of the other takers of the placement by checking out this regulatory filing over at the BCSC. 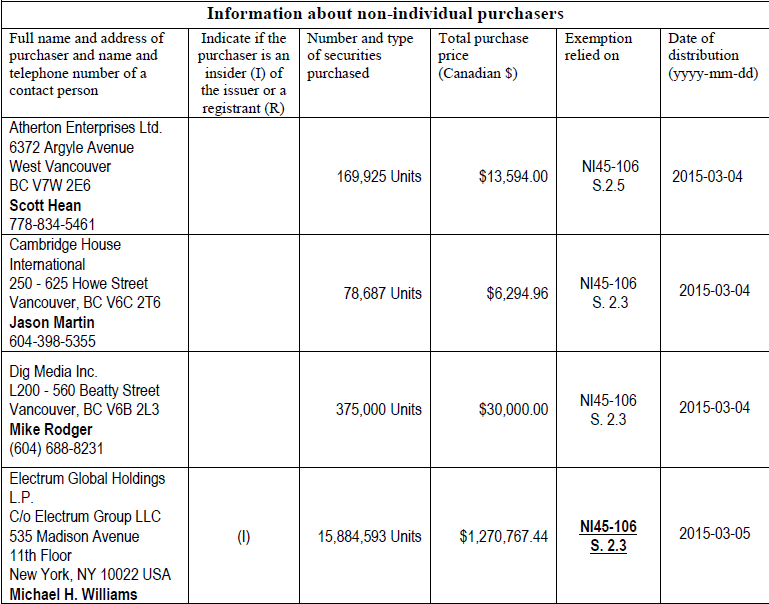 So you see Electrum there as the big taker and that’s fair enough. Chances are they’re making a bet and knowing their normal style, they’ll be in for the long term. Electrum’s the type of player that takes the risk on small priced issues in order to go for the high risk big reward.

But now let’s check on the others there.

We have Robert Swenarchuk and Scott Hean. Both those people are insiders of the Manex Group and they’re stock promoters, too. Then we have Cambridge House “buying” their share. We know them as the promotion company, media group and organizer of many a sector event. Also, there’s Dig Media which has decided to “take money from their own pockets and buy a few of these  shares”. Dig Media has several promo aspects to it such as this, The Investor News Network, which manages to be sponsored by a range of TSX and TSXV companies but also claim to offer independent, unbiased news coverage of the markets. Well ain’t that good for them.
As the SSV placement closure NR from early March points out, “Securities issued pursuant to the private placement carry a legend restricting trading of the securities until July 5, 2015 as to 2,305,407 Units and July 6, 2015 as to 15,884,593 Units.” IKN is prepared to wager several of its dollars to one of your donuts that come some point between the end of June and the middle of July, SSV.v will suddenly get favourable write-ups in the mining press via several channels and gets talked up by quite a few of the established newsletter writers that only ever have the best interests of their paying subscribers at heart, y’know. Then come the end of the escrow, a whole bunch of warrants get clipped, volume shoots up for a while and those on the inside track get to hold SSV.v shares for as long as they want afterwards at no charge to their personal finances.
And if you want to know who they have planned as their bagholder, take a look in the nearest mirror.