The protesters are still squatting inside the pit (photo from that link…nice weather for it at least). 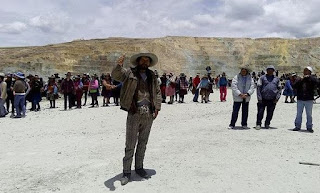 Production is still 100% halted.
The government is threatening them with arrest if they don’t leave and refuse to negotiate with them until they do.
The locals say that because HBM ignored them for three years since signing the deal which they say HBM subsequently ignored and forgot about, they’re not leaving until they get a written deal from HBM and approved by the Peru government.
The atmosphere is tense. To say the least.