HudBay (HBM): One month of Constancia

Peru’s mining ministry finally got round to publishing the July monthly production numbers for mines up and down Peru yesterday (they’re around two weeks later than normal), but better late than never and they give an idea of how 3q16 is shaping up for a bunch of companies. For example HudBay at Constancia, which produced 27.38m lbs copper in the month. If we take a deep breath and extrapolate that month in a straight line for the rest of the quarter… 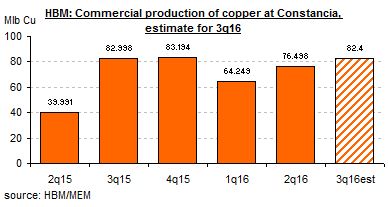 …it works out at an estimated 82.38m lbs Cu for 3q16. We’ll get the real figure soon enough of course, but HBM Constancia looks in fair shape so far production-wise. The copper price is another story, of course.

PS: I love the way this humble corner of cyberspace gets multiple hits from Hill Knowlton Toronto every time the word “HudBay” gets a mention on the blog. Just because you’re paranoid don’t mean they’re not after you, guys.