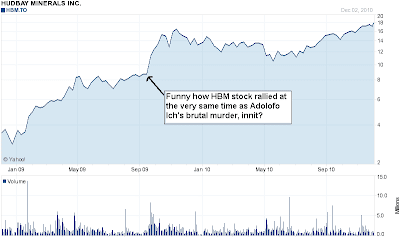 Hey there dudettes and dudes, do you live in the Montreal area? Do you follow the mining industry? Do you have Monday morning free? Well if so, IKN has the date for you! This excerpt from HudBay Minerals (HBM.to) NR out today gives us the lowdown:

Yes indeedy, you too can attend and find out stuff about this most fascinating of companies. And just in case the meeting gets a bit flat and you find the Q&A session at the end of Garofalo’s presentation needs a bit of perking up, here’s a bit of information you might like to quiz him on.

Toronto, Canada and Guatemala City, Guatemala: Angelica Choc and her lawyers announced
today a lawsuit against Canadian mining company HudBay Minerals Inc. relating to the killing
of her husband, Adolfo Ich Chamán. On September 27, 2009, Adolfo Ich, a respected Mayan
Q’eqchi’ community leader and an outspoken critic of harms and rights violations caused by
mining activities in his community, was hacked and shot to death by security forces employed at
HudBay Minerals’ Fenix Mining Project in an unprovoked attack near the town of El Estor,
Guatemala. continues here

Interesting stuff, right? Well let’s find out a bit more starting with the statement made by Angelina Choc, Adolfo’s widow:

My name is Angelica Choc, and I am indigenous Mayan Q’eqchi’ from the community of La
Uníon, in the Municipality of El Estor, Republic of Guatemala.

Just over a year ago, my husband, Adolfo Ich Chamán, was killed by security forces employed at the Fenix mining project in Guatemala – a mining project owned by Canadian company HudBay Minerals. In the afternoon of September 27, 2009, I watched my husband leave our house for the last time. I later learned that mine security forces had surrounded my husband, dragged him through a gap in a fence and hacked at him with machetes. Then the mine’s chief of security shot him in the neck at close range. This attack was unprovoked. My husband was a teacher, a community leader and a defender of indigenous Q’eqchi’ land rights. I believe he was killed because he spoke out about the rights violations caused by Canadian mining in Guatemala. I believe he was killed because he was encouraging communities to stay united against the harmful practices of the mining company. It is very painful to remember such shocking tragedy. The days since my husband was killed have been very hard. There has been no justice. The man who killed Adolfo remains free. And the mining company has not been held accountable. My five children have lost a father; I have lost my husband; and our community has lost a leader. We need justice for these losses.

And for further fun reading, check out the legal proceedings papers filed in Canada against HudBay this week.  So once HudBay (HBM.to) has finished their slick and positive presentation on Monday I’m sure you guys won’t be short of a subject of healthy and spirited conversation. And then when it’s all over, don’t forget to tell David Garofalo to go fuck himself.

UPDATE: Jack Caldwell over at I Think Mining also examines the HudBay Fenix case today. Fortunately for the world his prose is far more measured than the IKN snarkfest, but Caldwell does finish with a flourish (and one this author thoroughly agrees with):

“HudBay says it is continuing to evaluate the property.  I bet that they, as many other Canadian mining companies, will choose to stay away from mining in Guatemala for the foreseeable future.  I for one would not buy shares in the hope of successful mining by Canadians in Guatemala.”

Here’s the whole I Think Mining post. It’s well worth a read and Caldwell knows Guatemala as well, having recently been there on mining biz.