Yesterday in Santiago Chile, we had the first ever legal harvest of marijuana in South America. Here and here are a couple of English language reports on the event, the second from AP including these extracts…

A Chilean municipality harvested legal medical marijuana Tuesday as part of a government-approved pilot project aimed at helping ease pain in cancer patients.
The harvest comes after Chile’s first planting of pot for medical uses in October 2014. It is the work of a municipality in the capital of Santiago and the Daya Foundation, a nonprofit group that sponsors pain-relieving therapies.
…
“It’s a huge achievement,” said Cecilia Heyder, who suffers from systemic lupus and was diagnosed with breast cancer in 2011. “I just wish all of Chile’s municipalities could achieve this as well.”

So now the fun bit, the images from the event yesterday such as “media scrum for the special award-winning angle of thing that’s been growing out the ground for thousands of years”… …and of course “smart qualified people in white coats with plant”: 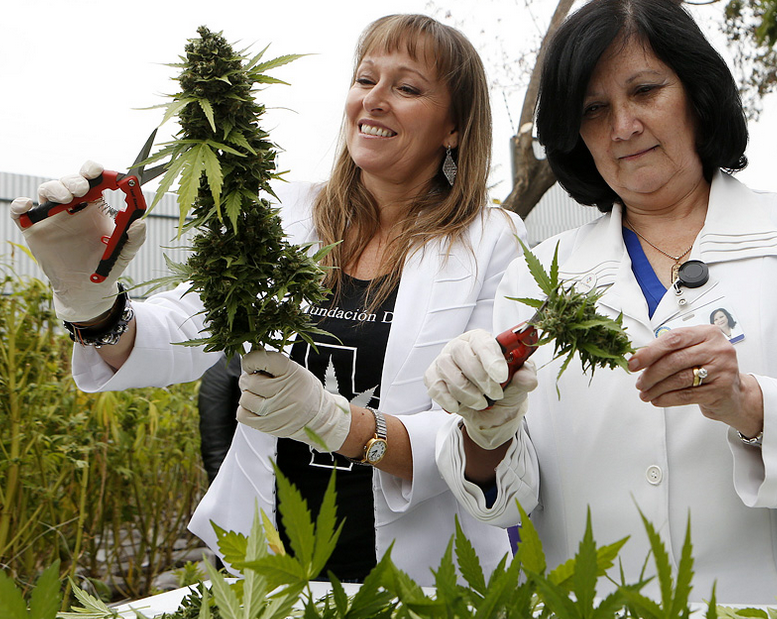 It begs questions. Why can a plant daring to do what it’s done naturally for all of history, i.e. growing, be news? How can a plant be against the law? What part of a seed’s germination is a crime? What’s with the white coats and gloves anyway? Marijuana isn’t normally a thing in our eyes but a concept, it’s easier to handle the supposed illegality of marijuana when it’s framed as the effect it has on people (REEFER MADNESS!) so on occasions such as the big photo-op yesterday we get a sideways glimpse of how incredibly stupid it all is.
It stems (no pun intended) of course from fear. Human society is afraid of the marijuana plant because of its potential to wreak havoc on our form of society, the group ethic and way in which we must all pull together and work as a team in order to progress. After all, we don’t want anybody lying around enjoying themselves now do we? There’s work to be done. It is therefore bad, oh you naughty plant, but come the scientists who can take the bad and turn it into good and we are all saved. “Look everybody! We’re SCIENCE so now the naughty little delinquent is under our control, it cannot corrupt us any longer, we have tamed it and will use it well”. Marijuana is now useful to us, therefore we can rest easy, science has saved us again.

It’s the same human conceit that will see us as a species die long before marijuana does, a living thing that will enjoy global warming far more than us.