I fought the law and the law lost 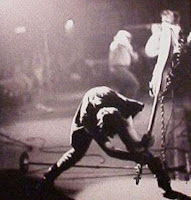 An excuse to peg up one of the
better rock photos of all time
More strong work on Honduras from The Miami Herald (really, the most pleasant surprise of the whole sorry episode…TMH is reporting balanced and objective stuff and should be congratulated). Check out how the report starts here and then click through for the rest . Also, those Spanish speakers among you should check out the full transcript of the interview at ElFaro….pretty amazing stuff.

TEGUCIGALPA — The military officers who rushed deposed Honduran President Manuel Zelaya out of the country Sunday committed a crime but will be exonerated for saving the country from mob violence, the army’s top lawyer said.

In an interview with The Miami Herald and El Salvador’s elfaro.net, army attorney Col. Herberth Bayardo Inestroza acknowledged that top military brass made the call to forcibly remove Zelaya — and they circumvented laws when they did it.

It was the first time any participant in Sunday’s overthrow admitted committing an offense and the first time a Honduran authority revealed who made the decision that has been denounced worldwide.

”We know there was a crime there,” said Inestroza, the top legal advisor for the Honduran armed forces. “In the moment that we took him out of the country, in the way that he was taken out, there is a crime. Because of the circumstances of the moment this crime occurred, there is going to be a justification and cause for acquittal that will protect us.”