I wonder why Ventana Gold doesn’t talk about political risk much….. 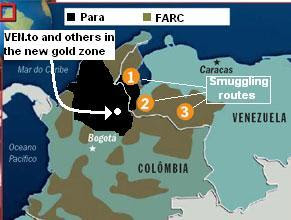 Funny old world, innit? You get reams and reams written on Ventana Gold (VEN.to), not to mention next door neighbour Greystar (GSL.to). There’s also Anglo at La Colosa and then after those big three a whole bunch of hangers-on in the area, too. But I’ll be darned if I can find a word written by any analyst hot on VEN.to and/or the other stocks about political risk in the cocaine-smuggling, fast-shooting, blood-stained Colombia/Venezuela border region.

Which is strange. I mean, to the East of Santander (where the gold-bearing region in question lies) you have Arauca, controlled by the far-left wing FARC, so why not check out the latest on what’s happening in that area by going over to the CAJA blog and reading this post (excerpt here)

Pablo Rodriguez, of the Sikuani people, taught in the indigenous school in Marrero. He was murdered in his classroom by the FARC on June 9. Because of the difficult access to that community, his body wasn’t recovered until two days later. When I arrived in Arauca City, the wake had finished and the funeral procession was marching to the cemetery.

Humberto Echeverri taught for 18 years in the community of Los Colonos and he was with his students on June 11. The Social Pastorate program of the Catholic Church has a nutrition and community garden program in Los Colonos, and they were monitoring the weights of the children. FARC guerrillas came into the school and told Humberto they needed to speak with him. They led him away, prevented the people from following, and then killed him.

…. and then when you’ve had your heart broken by the stories and photos of the children left behind, check out this other recent post at CAJA when the blog author suddenly found himself on the wrong side of town(excerpt here):

The bursts of gunfire were becoming longer and the direction of the sound was changing. It seemed as though the shots were coming closer. There was a particularly long, and ugly, burst of automatic rifle fire. At one point, shots were fired in the plantain grove – 100 yards away.

We also heard explosions which could have been army mortars or guerrilla cylinder bombs. The guerrillas sometimes launch propane cylinders filled with shrapnel – deadly devices that often veer off course and miss their intended target.

A group of soldiers had set up camp in the neighboring house – 50 feet away. I was afraid that the explosions could have been cylinder bombs and that the guerrillas would attempt to hit the army encampment. I counted the explosions (something else to focus on) and noted 16.

A helicopter came and circled overhead five minutes later. A roar of machinegun fire came from the helicopter – the ugliest sound I’ve heard in my life. I looked behind me and saw Nidia crouched underneath a table with her son Brandon, who was crying. One of the bullet cases tore through the metal roof of a house fifty yards away and landed on the ground a few feet from a mother and child (see attached photos).

Sounds like a safe place to start a multi-billion dollar gold mine or two next door to, doesn’t it? So what about the far-right wing Paramilitary zone that includes and runs North of Santander? Well, here’s Plan Colombia and Beyond with a video post of what an area looks like after the paras surge through and force people to relocate. And here’s a report on the paras‘ recent admissions that they’re responsible for 21,000 extrajudicial killings in Colombia.

That video example is North of the exact zone, but Bucaramanga, just next door to Ventana & friends, is a well-known para stronghold, too. So why not do a bit of DD and ask your friendly stockbroker about political risk on these stocks the next time he pumps them down your throat with his $10 target prices? If he tells you the truth, I’d guess the investment may not sound as inviting as it did when he was giving you the full spiel. If he tells you there’s little risk and there’s nothing much to worry about, I’d guess it’s time to change your investment advisor.