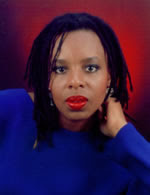 Peggy Dodson (for it is she); Welcome to your
house of pain, scumball scamster

Today IKN reveals a gold mining scam. Not a cheap-shot junior mining company trying to pull a fast one, nor a scummy newsletter writer skirting the edges of what’s legal or illegal. No, this time we’re talking about a full-on, no-holds-barred, dirty, criminal and illegal fraud operation that’s designed to bilk people to the tune of THREE HUNDRED AND SEVENTY-MILLION DOLLARS (I put that last bit in capitals to catch your attention).

Ladies and gentlemen, let me present Peggy Dodson (photo above). She heads up the Urban Broadcasting Corporation TV station out of Harlem NYC, she describes herself as a “...professional speaker, visionary, creatress and business professional.” And now to add to her career history of jazz singer and broadcasting entrepreneur, Peggy is branching in the gold mining business…in a big way.

All that preamble is to get you to download this PDF report. Do it now, download and read what Peggy is trying to offer to the world, because if it weren’t so brazenly criminal and had the potential to rip off thousands of naive people it would be funny.

The basis of this fraud is a 160 acre gold mining claim in Kern, California called ‘Gold Pan’. Peggy, along with her associate Jeff Magnuson and probably a whole team of fraudsters in the background, are pitching to raise U$370,000,000 to develop Gold Pan via the issuance of senior secured collaterized notes (i.e. bonds) that come in $100,000 sized packages. Or in other words, the minimum investment (however in this case, when you see the word ‘invest’, please read ‘flush money down toilet’) that Peggy Dodson is trying to get from you is U$100,000 per tranche of this debt issuance. The debt is pitched as coming with an 8% coupon that would be paid half yearly for 20 years, beginning in 2011. Debt maturity is in 2031.

When the money is raised, the pitch tells us that Gold Pan will be put into production and will make lots and lots of money. However, the numbers used are straight out of fairytale land and here are a few for your reading enjoyment. We are told that:

The numbers are, quite simply, ridiculous. Just to pick one of those sets out the hat, to get 1.7m oz Au from 3.68mt throughput means that even at 100% recoveries the gold content would have to be at 14.5g/t! For a placer deposit! In California! And nobody’s ever heard of it before! My name is Franz Kafka, welcome to my world.

And this is the business plan that Dodson, Jeffrey Magnuson and whoever else is behind this fraud is pitching to people in order for them to hand over cash in lumps of $100,000 at a time to a minimum of $35m and a maximum (God forbid it) of $370m, which according to the pitch would be collateralized on the property itself! There is of course some vague promise of buying insurance coverage for the bonds, but by the time that one becomes a questioned issue these scamsters will be in Tahiti.

Here, for example, is an image that Peggy Dodson is using in her fraudulent activity that tries to convince people the bonds offering is all on the level. I love that “not created by Bloomberg” bit!

Hmmm…I wonder whether the Mayor of
New York knows about this screenshot?
But if that isn’t enough to convince you yet, there’s even more evidence of fraudulent activity. Besides the fact that Peggy Dodson and Jeff Magnuson have refused on several occasions to hand over an mining engineer’s report on the Gold Pan property that is supposed to exist, the person named as “Lead Mining Manager” is also falsified.

Your author has been in contact this weekend with the man named in the file. He is a bona fide, legitimate and professional mineral economist, geologist, minerals appraiser and valuer who we’ll call ‘TE’ here, as I don’t want his honest and good name appearing in Google searches concerning this fraud. When I mailed TE and asked him if he’d ever heard of Dodson a reply came quickly and read (extracted):

I have had a few brief exchanges with Ms Peggy Dobson (sic) by telephone and e-mail over the last few months about doing some work for her. These were about an association placer claim in Kern County, California. The discussions have not reached the stage of a contract for work being drafted. Some mention was made by her initially of having me be her mine manager, but as of yet, I have not been retained in any role by her.

I then sent TE the pitch PDF that you can download on that link above (or here if you like), explained a little about the highly dubious numbers being used by Peggy Dodson and pointed out that his name and professional biography was being used to sell the scam. He wrote back (excerpted):

Thank you for bringing this very unsettling use of my name to my attention and for sending me the entire document. I will forward your message with the attachment to my attorney today.

So the only other member of management aside from Peggy Dodson listed in the pitch for this debt raising has no idea he’d been named as ‘Lead Mining Manager’ and as soon as he’d heard about this immediately contacts his attorney to make sure his name isn’t sullied!

We suspect that Peggy’s plan is to offer this business opportunity to people that have little or no idea about mining, because if you take a look through the pitch sheet you’ll note enormous gaping holes in correct disclosure all over the place. However, Peggy made a bad mistake last week and sent the pitch to somebody that actually knows about mining. Even worse for Peggy, that person happens to be a friend of IKN and forwarded the pitch to your humble author, already noting that it was the strangest scam he’d seen for quite a while. Therefore full kudos is deserved to the IKN friend who will be making sure the SEC and/or the Attorney General knows about Peggy Dodson and her bright ideas for wealth in the very near future.

So if you get approached by Peggy Dodson or Jeffrey (Jeff) Magnuson or anyone else offering you the deal of a lifetime tied to the Gold Pan placer gold deposit in Kern County California, run away fast. This is a scam, it’s fraud, it’s illegal and if you give them your money you will never, ever see it again. IKN, signing out.