1) On Monday March 26th, as published in the local press, some beak in Dom Rep slaps a suspension order of GoldQuest (GQC.v). Exhibit A, with link to original here: 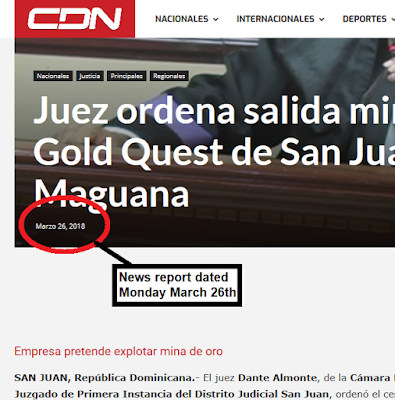 2) On Tuesday March 27th, GoldQuest (GQC.v) trades as per normal, light volume and no real price change.
3) On Wednesday March 28th somebody somewhere gets wind of the crap going down and dumps their position. GQC drops by plenty, your humble scribe looks at his screen and goes “Oh look at that, wonder if there’s any news…” and goes off to play on the Google machine. Four minutes later, this post appears on the blog (and here’s the screenshot) which includes the link to that above news story:

4) On Thursday March 29th (i.e. today) this note is published by Haywood: 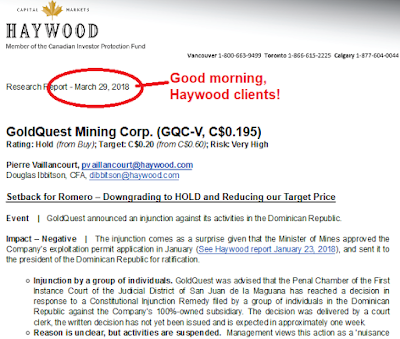 Uh-ohhhhh, it’s a Downgrade To Hold (aka make like a shepherd*). It’s also fun to note that Haywood’s analysts made a special effort to avoid stating when that ruling was handed down. Hmmm….wonder why. Let’s re-cap all that:

Anyway, what we can safely deduce from this episode is that analysts at Haywood are obviously relying heavily on this humble corner of cyberspace (published for free and run by somebody who doesn’t cover GQC and holds no shares in the thing) for their LatAm/Carib mining news which they subsequently charge their clients to read. Therefore I’d like to apologize directly to Pierre Vaillancourt and Douglas Ibbitson, two people generating at least part of their monthly salary from covering GoldQuest closely, for the poor service on this story. Sorry about getting to the story late for you guys, I hope it doesn’t ruin your week.

*Get the flock outta here