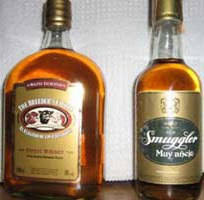 Yes, it exists. Be very afraid
Clarin today has a report on how Argentine Commerce Secretary and Kirchner stalwart Guillermo Moreno has been clamping down on imported goods since April in order to defend national production against foreign goods making their way in (and seriously pissing off foreign countries, some of whom are making their views clear to Klishtina in Spain this week). The report talks about the green and red highlighter pens used by Moreno to decide whether this-or-that product is allowed into the country, how companies as big as Kraft have had to beg for up to a fortnight to get consignments of chocolates into the country and how products such as tinned peaches, olives, cheeses and all types of pastas are given an automatic red light.

However, one specific import doesn’t have a problem. Scotch whisky get in because according to Moreno (quoted anecdotally), “Whisky can come in, but only because (the whiskies) produced here are disgusting.”

For what it’s worth, personal experience says he’s right about the Argentine whiskies. This still makes Moreno a dumbass, but at least he’s a dumbass with a palate.