In case you haven’t heard……… 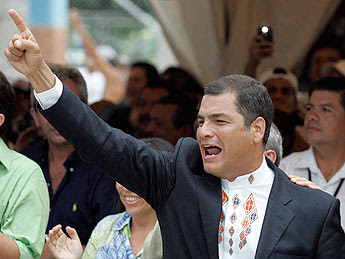 Studmuffin celebrates the fact he has the best
dress sense in any leader not named Michelle
Polls have him projected to get 54% or 55% of the vote (it’ll take a while to get the definitive tally, Ecuador is as Ecuador does) but the final final total will be a detail. More importantly he’s the first Ecuador Prez to be voted into the job on the first round of voting since democracy came back to Ecuador, which is no mean achievement in a country famous for chucking out their heads of state before time.

I had a quick search for the worst coverage of his victory in the English language this morning. My interim winner is The Washington Times, who managed to squeeze in the flagging economy, the “volatile Andean country” and the NATCH! reference to being a Chávez-lovin’ lefty in just 122 words. More cringeworthy coverage of the region, eh? ¡Que sorpresa! Here it is in full.

DURAN | Ecuadoreans voted Sunday in an election that incumbent President Rafael Correa was expected to win easily, even as the economy flags, because of solid support for his welfare programs.

Polling stations were busy into the afternoon across the volatile Andean country of 14 million people that is known as much for toppling presidents as its Galapagos Islands and remote Amazon tribes.

A Correa win would confirm him as the most powerful leader in Ecuador’s 30-year-old democracy and mark another victory for a generation of left-wing presidents like Venezuelan Hugo Chavez who govern many countries in the region.

An early exit poll seen by Reuters on Sunday gave Mr. Correa 56 percent of the vote and a 27-point lead over his nearest rival.