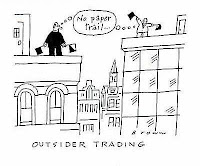 This post is a quick look at the insider trades tool, something that’s always worth keeping an eye on. Not every inside trade is significant, of course, with the trick often being spotting the patterns that emerge. Let’s look at three examples, the first one negative (and from one of the usual suspects). The second is a positive example and makes me think “hmmm…worth looking into that stock”. The last one is so bare-faced and scammy that you have to wonder how they get away with it, it’s so bad.
First Dorato Resources (DRI.v) up to its old tricks. Yesterday this Cardero Group play released the retail pump PR and send out suitably smarmy mails to market-type people at the same time, trying to draw attention to themselves (I got one). Amazingly it’s also the day insider Bedoya sells another 18.5k of stock to add to his previous recent sales. This licenced bandit can’t get rid of this paper quick enough. In the most basic of terms, these people want you to buy the stock while they sell it. Nuff said.
xxxxxxxxxxxxxxxxxxxxxxxxxxxxxxxxxxxxxxxxxxxxxxxxxxxxxxxxxxxxxxxxxxxxxxxxxx
Now the positive example, and I’ve chosen Queenston (QMI.to). Now these guys do a fairly shareholder-friendly financing that’s suscribed in a flash and at the same time insider Robert Cudney is snapping up stock on a regular basis. That’s a nice combo, one that has “they put their money where their mouth is” written all over it.
xxxxxxxxxxxxxxxxxxxxxxxxxxxxxxxxxxxxxxxxxxxxxxxxxxxxxxxxxxxxxxxxxxxxxxxxxx
And finally, the downright deceptive. Plexmar (PLE.v) is a miner of shareholder cash that should be avoided like the plague. As mentioned in this recent post, CEO Guy Bédard dumped 445,000 shares on the market the same day that the company share price jumped on PR “good news”. But then it just got better! Bédard subsequently and very quickly replaced the stock he sold at 9c with double the amount at 5c, taking part of the very recent placement that could only fill a little over a third of the target 20m shares. Expect the lather-rinse-repeat cycle to continue long into the future at PLE.v, but for the sake of your own back pocket please don’t be part of it.
So there are three examples of how to use insider trading info to become more informed: The abysmal DRI.v, the interesting (on first viewing at least) QMI.to and the rotten-to-the-core PLE.v. Canadians can get insider info either via the website Canadian Insider (a useful quick check source) or via the main SEDI site (the one to use for the real DD). US stocks have insider trades filed directly at the according SEC page.