Institutionalized Racism in Peru: The Case of Hilaria Supa

Any of you out there speak a 2nd language? I do, and as a matter of fact even if I say so myself my autodidact Spanish, after all these years, isn’t bad at all. However I’m the first to recognize that when it comes down to writing in Spanish I still make a whole heap of grammatical errors. This is pretty normal stuff, I’d guess, for the majority of second-language speakers that haven’t rigorously studied the language in question.

However, it doesn’t make me the object of ridicule. Ladies and gentlemen, I present to you the case of national congresswoman, indigenous rights defender and all round impressive person Hilaria Supa. This week Supa has been subjected to a humiliating and disgusting racist attack by a Peruvian national daily newspaper. Here’s the offending front page of El Correo (truly offending)…. 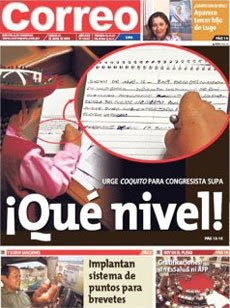 ….that throws sarcastic remarks at Supa because after the El Correo photographer took a candid shot of the notes she was making in parliament the newspaper took gleeful delight in pointing out all her spelling and grammatical errors as written. Among the barbs in the cowardly and un-bylined report, Correo told her to go take spelling lessons, said she wasn’t fit to be a congresswoman and compared her unfavourably to an eight year old girl.

So let’s make this perfectly clear from now on: El Correo is a right wing rag that has a long history of racist attacks, but this one is worse than most. And be 100% crystal clear that this front page would never have happened if this congresswoman representing Cusco wasn’t indigenous, whatever El Correo and its readership might say otherwise. No matter that Spanish is Supa’s second language, in the screwed up racist world of the white criollo Peru establishment the woman is dumb if she can’t write clean Spanish script (she speaks Spanish perfectly, by the way). Also, check out the extract from her wikipedia page to get an idea of the quality of this person. This is just the English language page I’m pasting here, the Spanish one being far more detailed:

Hilaria Supa Huamán (born in the community of Wayllaqocha, Anta, Cusco region, in 1957), is a human rights activist, an active member of several indigenous women organizations and a Peruvian politician. She is currently a Congresswoman representing Cusco for the period 2006-2011, and belongs to the Union for Peru party.

Hilaria Supa was raised by the parents of her mother, Helena Huamán, who were peasants in a hacienda.

In her childhood she saw the hacendado mistreat her grandfather and violate women, which had a crucial impact on her life. Her grandfather, who fought for peasants’ rights, was murdered in 1965. She had to go to Arequipa, and when she returned she found that her grandmother had also died.

Her partner, the father of her children, died in an accident when she was 22.

Afterwards she worked as a house maid in Cusco, Arequipa, and Lima.

In the 1960s she became involved in organizing regular meals for children, together with other women. She became leader of the Micaela Bastidas Committee in Anta, Cusco and took part in the fights for land rights, which finally resulted in the agricultural reform under Juan Velasco Alvarado.

In 1991 she became organization secretary of the new founded Women’s Federation of Anta (Federación de Mujeres de Anta FEMCA), where she was responsible for alphabetization, traditional medicine and pesticide issues.

Hilaria Supa has taken part in numerous international women’s meetings, where she has actively used and promoted her native Quechua language. She has been resolutely lobbying against sterilization of women, accusing the former health minister under Alberto Fujimori, Alejandro Aguinaga, of carrying out a population policy resulting in enforced sterilization of 363.000 Peruvian women.

She was elected to the Peruvian Congress in 2006, where she was the first parliamentarian in Peruvian history to take the oath in an indigenous language, Quechua, followed by her fellow congresswoman María Sumire, for which both were sharply criticized by Martha Hildebrandt and some other members of congress.

That, I’m sure you’ll agree, is one remarkable woman. Did you see that last line, by the way? Worth reflecting on the racism that’s institutionalized at even the highest, lawmaking level in Peru because if they do it in congress everyone else will think they can get away with it. Read it again, as it says that Supa was criticized for taking her oath in Quechua by white-skinned Lima politicos, even though it’s her first language (and will mean more to her and the people of Cusco she represents) and even though Quechua is one of the two official languages of Peru.

Stomach-churning racism happens all the time in Peru. This is the country where indigenous get jeered at for proudly wearing their traditional garb. This is the country where doormen at swanky clubs and restaurants will not let dark-skinned people in because they don’t want to “lower the tone”. Even well-meaning people are profoundly racist. More than once on trips to Lima I’ve found myself talking about my 100% indigenous blood wife and our two kids and heard the question, “But are they white like you?”. I shit thee not.

But my favourite recent story that highlights just how discriminatory Peru really is concerns letting maids into restaurants at lunchtime. In Lima it’s typical for the middle class family to have a (often indigenous blood) nanny to help out with the young kids, but recently there have been protests from some quarters about how the maids are not let into restaurants with the rest of the family. So rather than order restaurants etc to serve one and all whatever their position, the Peruvian gov’t made it illegal for maids to be seen in public wearing their in-house uniforms. Y’see, in the warped view of Peru’s legislature, if these people are suddenly invisible they’re not so likely to clutter up the place. Who gives a damn if you’re wearing a uniform or not!!??!!? What kind of mad government thinks you can hide racism behind a set of clothes?

Fortunately, there are pockets of enlightened people in the country trying to do something about the all-pervading racist attitudes in Peru, for example the blog Choledad Privada (great blog name by the way…smart play on words) is a beacon of sanity and there are others of the same ilk. But to repeat, if racism is part of daily life and indigenous heroes such as Sula are attacked in the most disgusting ways by Peru’s mainstream media and government, the intelligent Peruvian is swimming against a very strong tide.

Deserved hat tips to Sheput and Reportaje al Peru, two Peruvian bloggers that care enough to shout “racist Correo” at the tops of their voices. Kudos.