Is Borev run by Ecuador’s Ambassador? 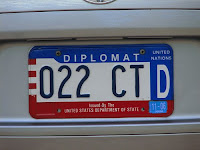 On May 20th the man battling Simon Rosemary of the title of ‘LatAm’s worst hack’, namely Juan Forero of ‘The Washington Post’ filed this report entitled “Ecuadoran Town a Hub for Drug-Running Rebels, Colombia says“ that was basically yet another ridiculous and politically laden hit-piece trying to blame anyone except America’s Friend™ Uribe and the abject failure of Plan Colombia for the ever-rising production of Colombia’s number one export.

So when Borev took up the cause to rebut Forero’s guff&nonsense, a small section of the world cheered a little cheer. Here’s a quick excerpt from da booorev, but go see the full thing here:

The May 20 news story “Ecuadoran Town a Hub for Drug-Running Rebels, Colombia Says” provided a misleading account, driven by senior Colombian officials, that was designed to confuse readers. Colombian irregular groups cross the border because of the Colombian government’s omissions on its side of the border, thereby gravely affecting Ecuador.

Ecuador has had to devote onerous resources to meet the challenges of security and development in a border dominated by Colombian irregulars. This effort by Ecuador has been praised by the U.S. State Department in the “International Narcotics Control Strategy Report” and the “2008 Monitoring Report on Terrorism,” which highlights as an Ecuadorian achievement the dismantling of 11 laboratories for cocaine production and more than 130 FARC camps, as well as the deployment of more than 100 battalions at the border, despite not having the billions of dollars of support that Colombia receives from the U.S. government.

It was worth mentioning that Ecuador is free of coca cultivation because it is the most successful country in the region in combating drug trafficking. It is unfortunate that Colombian armed forces are being diverted to discredit the government and people of Ecuador.

The writer is Ecuador’s ambassador to the United States.

All this begs the question; Are Luis Gallegos and blogmeister Borev related? Is the mysterious and knowledgeable Borev really a LatAm diplo hanging in the Empire somewhere? Is there some sort of international conspiracy going on via the humble media of internetwebpipes?* I think we should be told.