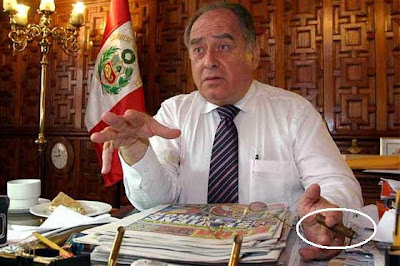 A visibly spaced-out Antero tells the story of Itsy-Bitsy Spider with just one hand, as the other is
busy holding a marijuana joint disguised as a Cuban fatboy
…..to hand out the weekly ‘No Shit Sherlock’ award, but as this quote is basically unbeatable we’ll just get it over with today.

Ántero Flores-Aráoz is one of those cigar-smoking Peruvian career politicos from the “good families” who is currently in place as Peru’s Defence Minister. He was called upon to comment on yesterday’s skirmish between Sendero Luminoso narcoterrorists and Peruvian soliders in the VRAE coca growing region of central Peru. The incident left one Peruvian soldier dead on the ground and others injured as Sendero managed to spray an airborne helicopter. All signs also point to some of the Sendero insurgents also being injured. Anyway, on with the quote. Flores-Aráoz said,

“There is always a risk of deaths or injuries during combats.”
Thank you for that, dumbass. Real insightful bunch of ministers over there in Peru, no?