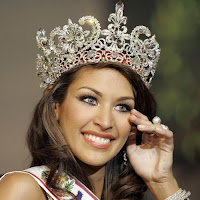 Dayana Mendoza (for it is she)
I really, truly and honestly don’t know where to start with this report of Miss Universe 2008, (Dayana Mendoza of Venezuela) and Miss USA (Crystle Stewart) recounting their fun days out at Guantanamo Bay, Cuba. So I’m just going to translate it directly with no further comments and let you enjoy it, too.

Translated via Ottotrans™, and here’s the original Spanish report to prove that I am not making this shit up. I promise I’m not. It’s word for word. Enjoy, gentle reader.

“It was an incredible trip”


Venezuela’s Miss Universe: “Guantanamo Is So Interesting”
Venezuelan Dayana Mendoza, Miss Universe 2008, visited the Guantanamo military base two weeks ago to “entertain” the soldiers stationed there. The beauty queen said that she had been in the detention camps. “We saw the jails, where they bathe, how they are entertained with movies, art classes, books.“

Miss Universe 2008, Dayana Mendoza of Venezuela, and Miss USA, Crystle Stewart, paid a visit to the US naval base and detention centre for alleged terrorists at Guantanamo Bay and found it “interesting”.

On her web page, Mendoza explained that both beauty queens visited the Guantanamo Bay base in Cuba on Friday March 20th in order to greet and entertain the military personnel stationed there.

“It was an incredible experience,” said the Venezuelan. “They (in Guantanamo) knew that Crystle and I were coming to visit and the first thing we did was to sit down to an enormous lunch. Later we went to one of the bars they have there.”

Since the beginning of 2002, the USA has held hundreds of men at Guantanamo, captured in different parts of the world as supposed terrorists and has held them prisoner without trial or appeal. Many of them have been subjected to torture, according to reports from human rights organizations.

Mendoza said that she and her friend talked with Guantanamo personnel “about the base and what life was like there, and in the following days we had a great time, it was a really memorable trip.” The base personnel took the two women on a visit in a ‘boat’, unidentified by Mendoza, and a sightseeing tour that “was a lot of fun.”

“We also saw the military dogs and they gave us a cute demonstration of their obedience”, added Mendoza. “All the army people behaved themselves very well with us”.

“We visited the detention camps and saw the jails, where they bathe, how they are entertained with movies, art classes and books”, she added. “It was very interesting”. The young Venezuelan added that “the water in Guantanamo Bay is sooooo beautiful. It was incredible and we were able to enjoy it for at least an hour.”

UPDATE: The NYT’s lede blog is running the story too. I could have saved myself all that translation bother. Thanks for the link, RB.